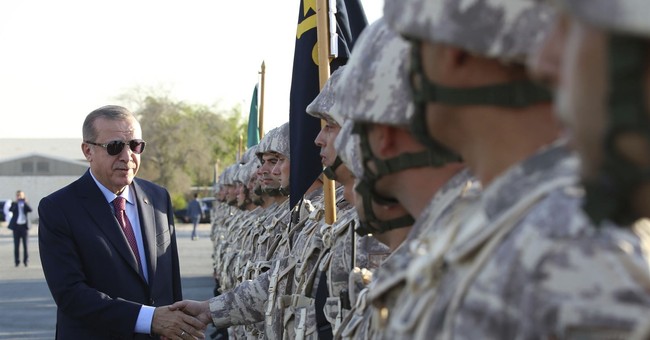 Christian leaders in Syria are warning that Turkey’s invasion is a “form of ethnic cleansing” against Kurds and Christians in the region so the country can move its refugees there.

Bassam Ishak, a Syriac Christian leader, told NPR about the events that were transpiring on the Syria-Turkey border, saying that residential areas are being targeted.

The airstrikes and artillery bombardments had barely begun in the Syrian city of Qamishli, just across the border from Turkey, when Bassam Ishak's cellphone began ringing.

"The attacks are widespread," Ishak told NPR by phone. "They are targeting residential areas in Qamishli, where people of all religious backgrounds live. We think this is a message to the Kurds and Christians there to leave, so Turkey can move refugees there. We think it's a form of ethnic cleansing."

By Thursday, Turkish ground forces had reportedly seized at least one village from Kurdish fighters in Syria, and the U.N. refugee agency reported that thousands of people were fleeing the Turkish advance.

Turkey launched its incursion into Syria three days after President Trump told Turkish President Recep Tayyip Erdogan that U.S. troops stationed along the border would be withdrawn. About 40,000 or 50,000 Christians live in the area under attack, according to Ishak, president of the Syriac National Council of Syria, and U.S. Christian leaders have been almost unanimous in criticizing what they see as Trump's acquiescence to the Turkish move. (NPR)

In the face of widespread criticism over his decision to withdraw U.S. troops stationed along the border, President Trump said the U.S. made clear that it believes the invasion "is a bad idea" and "does not endorse this attack."

"Turkey has committed to protecting civilians, protecting religious minorities, including Christians, and ensuring no humanitarian crisis takes place—and we will hold them to this commitment," he said.

No one is buying Turkey's pledge, however.

On Thursday, House GOP Conference Chairwoman Liz Cheney, R.-Wyo., said legislation is being introduced to sanction Turkey over the invasion.

“President [Recep Tayyip] Erdogan and his regime must face serious consequences for mercilessly attacking our Kurdish allies in northern Syria, who incurred thousands of casualties in the fight against ISIS and helped us protect the homeland,” she said. “These sanctions are not only a response to the Erdogan regime’s violent attacks in northern Syria. Congress has long had concerns about the regime’s cooperation with U.S. adversaries, such as Russia.

"If Turkey wants to be treated like an ally, it must begin behaving like one. They must be sanctioned for their attacks on our Kurdish allies."

Cheney's bill, which has more than two dozen Republican cosponsors, is similar to the one Sens. Lindsey Graham, R.-S.C., and Chris Van Hollen, D.-Md. announced Wednesday in the Senate.

"Turkey has been planning to attack the Kurds for a long time. They have been fighting forever. We have no soldiers or Military anywhere near the attack area," Trump tweeted on Thursday. "I am trying to end the ENDLESS WARS. Talking to both sides. Some want us to send tens of thousands of soldiers to the area and start a new war all over again. Turkey is a member of NATO. Others say STAY OUT, let the Kurds fight their own battles (even with our financial help). I say hit Turkey very hard financially & with sanctions if they don’t play by the rules! I am watching closely."