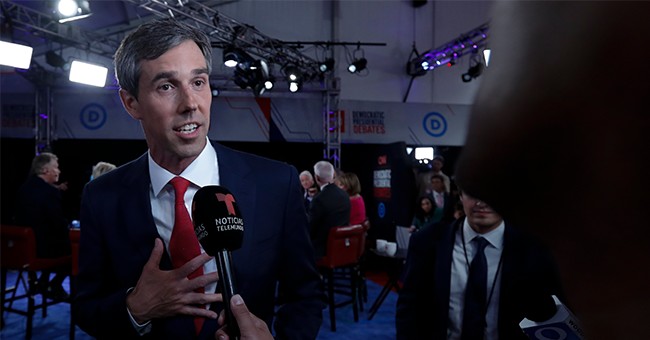 As we saw time and again with former President Barack Obama, when talk of gun control (and now gun confiscation) takes off, so do gun sales. One gun store owner in Tempe, Arizona, decided to capitalize on Robert “Beto” O’Rourke’s pledge to “take your AR-15, your AK-47” at the third Democratic debate last week by running a promotion the next morning called “Beto Specials.”

“I saw the comments that he made, and I was kinda like, ‘You know what: the Hell with this guy,’” Alpha Dog Firearms Owner Matt Boggs told The HolloNet in an interview.

Here’s the ad he ran on his Facebook page:

Beto O'Rourke said "hell yes we're taking your AR's". Well Beto, we're discounting AR15's to such a low price that EVERY AMERICAN can afford one. How about the low low price of just $349.99? Yeah, that works. Available online only. Go to www.alphadogfirearmsaz.com and look for all our AR15 and AK47 deals under the BETO SPECIALS tab. Deals and discounts will be added fresh all day!

In a matter of hours he sold 200 rifles and had to inform his customers that the store was sold out.

O'Rourke said during the debate that he's coming for guns if they were "designed to kill people on a battlefield... If the high impact, high velocity round, when it hits your body, shreds everything inside of your body, because it was designed to do that, so that you would bleed to death on a battlefield and not be able to get up and kill one of our soldiers.”

He continued: “When we see that being used against children, and in Odessa, I met the mother of a 15-year-old girl who was shot by an AR-15, and that mother watched her bleed to death over the course of an hour because so many other people were shot by that AR-15 in Odessa and Midland, there weren't enough ambulances to get to them in time, hell, yes, we're going to take your AR-15, your AK-47. We're not going to allow it to be used against our fellow Americans anymore.”