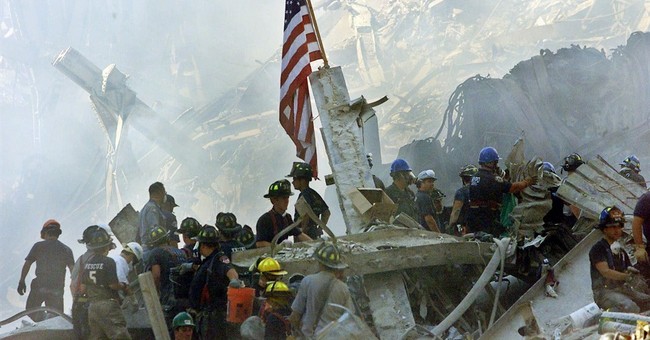 For the 18th anniversary of the Sept. 11, 2001 terror attacks, President Trump is scheduled to attend a ceremony at the Pentagon hosted by Chairman of the Joint Chiefs of Staff Marine General Joseph F. Dunford Jr. and Secretary of Defense Mark Esper.

He will observe a moment of silence at 8:46 a.m., to mark when the first plane hit the North Tower of the World Trade Center, before delivering remarks to honor “the nearly 3,000 lives that were tragically stolen from us on September 11, 2001,” according to a White House spokesman.

Earlier Wednesday morning, at 6:46 a.m., an American Flag was unfurled down the side of the Pentagon.

LIVE: 9/11 flag unfurling to honor & remember those who perished in the #September11th attacks at the Pentagon. https://t.co/IPVajD9m33

You can watch the moment of silence and ceremony live below:

Former President George W. Bush, meanwhile, will attend a wreath-laying ceremony at the Pentagon in the afternoon.

Back in New York, family members of the victims of both the 2001 and 1993 attacks on the World Trade Center will gather for a ceremony, which will begin at 8:40 a.m. The ceremony will include reading the names of all those who were killed.

This year’s ceremony will be the first at which a new memorial will line the outside of the World Trade Center.

This spring, six granite slabs were installed in the memorial plaza, designed to honor firefighters, police officers and others who died from exposure to toxins after the attacks. As there is no finite list of those who died in the aftermath, the slabs will remain nameless. (NY Post)