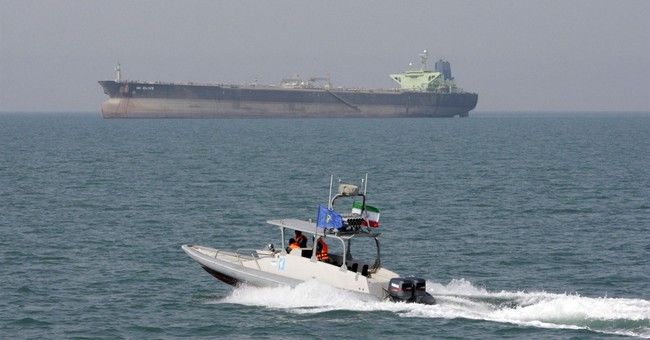 Armed Iranian boats attempted to seize a British oil tanker in the Persian Gulf on Wednesday, forcing a British warship to intervene.

The tanker was approached by several Islamic Revolutionary Guard Corps boats as it was heading toward the Strait of Hormuz, who reportedly told the ship to change direction and stop in Iranian waters nearby.

A British naval ship was only a few miles behind the tanker when it intervened and gave the Iranians a verbal warning to back off. A U.S. aircraft was overhead as well, which reportedly captured video of the incident, reports CNN.

With a US drone watching, the Royal Navy's HMS Montrose turned guns on #IRGC boats, which soon backed off. pic.twitter.com/cHstdzL9Kw

The UK's Ministry of Defense issued a statement to CNN about the incident.

"HMS Montrose was forced to position herself between the Iranian vessels and British Heritage and issue verbal warnings to the Iranian vessels, which then turned away," the statement said. "We are concerned by this action and continue to urge the Iranian authorities to de-escalate the situation in the region."

“Threats to international freedom of navigation require an international solution,” he said, reports FoxNews.com. “The world economy depends on the free flow of commerce, and it is incumbent on all nations to protect and preserve this lynchpin of global prosperity.”

Iran's Revolutionary Guard has denied that it attempted to stop the British tanker.

“Apparently the British tanker has passed. What they have said themselves and the claims that have been made are for creating tension and these claims have no value,” Iran’s Foreign Minister Mohammad Javad Zarif said on Thursday, according to the semi-official Fars news agency.

The incident is the latest in a series of confrontations between Iran and the West in the region.