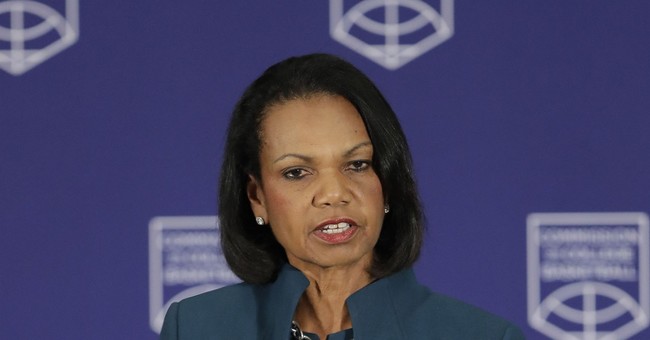 Former Secretary of State Condoleezza Rice set a reporter straight on Thursday when asked about the declining nature of race relations in the United States.

“There are people who will say it feels worse now when we’re talking about race, or it just feels like a divisive environment,” said NBC’s Sheinelle Jones.

Rice, however, was quick to give the reporter a healthy dose of reality.

“Look, it sure doesn’t feel worse than when I grew up in Jim Crow Alabama, OK? So, let’s drop this notion that we’re worse race relations today than we were in the past,” she responded. "Really? That means we’ve made no progress, really? And so, I think the hyperbole about how much worse it is isn’t doing us any good. This country is never going to be colorblind. We had the initial original sin of slavery.”

Jones countered, asking what she felt about people who believe the example is being set by President Trump.

“Oh, come on, alright,” Rice replied. “I would be the first to say we need to watch our language about race — we need to watch we don't use dog whistles. But when we start saying, ‘Oh, you know, it’s worse today,’ no, they’re not.”

Condoleezza Rice shuts down an NBC reporter for suggesting race relations are worse under Trump: “It sure doesn't feel worse than when I grew up in Jim Crow Alabama. So let's drop this notion that we're worse race relations today than we were in the past.” pic.twitter.com/TVyoQmDmCS

Share this on Facebook
Tweet
Jen Psaki's Ridiculous Spin After Biden Claimed He's Been to the Southern Border
Julio Rosas
Yes, Voters Are Starting to Blame Biden for the Price Spikes
Matt Vespa
Here's What Happened When Marjorie Taylor Greene and Liz Cheney Met on the House Floor
Matt Vespa
Here is Biden’s Schedule for the Weekend
Katie Pavlich