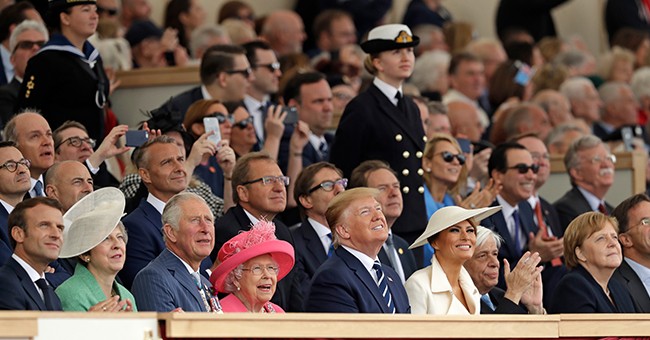 “Almighty God, our sons, pride of our nation, this day, have set upon a mighty endeavor, a struggle to preserve our republic, our religion and our civilization and to set free a suffering humanity,” he read, marking the moment U.S. and allied forces crossed the English Channel to storm the beaches of Normandy, France.

Roughly 300 World War II veterans were in attendance for the commemoration.

“When I attended the commemoration of the 60th anniversary of the D-Day Landings, some thought it might be the last such event. But the wartime generation —my generation— is resilient, and I am delighted to be with you in Portsmouth today,” she said, praising the “hundreds of thousands of young soldiers, sailors and airmen (who) left these shores in the cause of freedom.”

“Many of them would never return, and the heroism, courage and sacrifice of those who lost their lives will never be forgotten,” she said in closing. “It is with humility and pleasure, on behalf of the entire country —indeed the whole free world— that I say to you all, thank you.”

Other world leaders read first-hand testimonies from those who fought in World War II.

British Prime Minister Theresa May read from a letter written by Capt. Norman Skinner of the Royal Army Service Corps to his wife, Gladys, on June 3, 1944, a few days before the invasion. He was killed the day after D-Day.

He wrote: “Although I would give anything to be back with you, I have not yet had any wish at all to back down from the job we have to do.”

French president Emmanuel Macron read from a letter sent by a young resistance fighter, Henri Fertet, before he was executed at the age of 16. The letter said: “I am going to die for my country. I want France to be free and the French to be happy.”

Before he began Macron said: “First, let me thank you sincerely, on behalf of my nation” — drawing cheers from spectators gathered in Portsmouth.

Canadian Prime Minister Justin Trudeau read from the Victoria Cross citation of Lt. Col. Cecil Merritt, the first Canadian to be awarded the medal for gallantry for his leadership during the raid on Dieppe in 1942. (AP)

You can watch the entire ceremony below:

As we approach the 75th Anniversary of D-Day, we proudly commemorate those heroic and honorable patriots who gave their all for the cause of freedom during some of history’s darkest hours. #DDay75 https://t.co/hjTkdM7VcN