Trump Doubles Down on Criticism of Khan, Corbyn During Press Conference 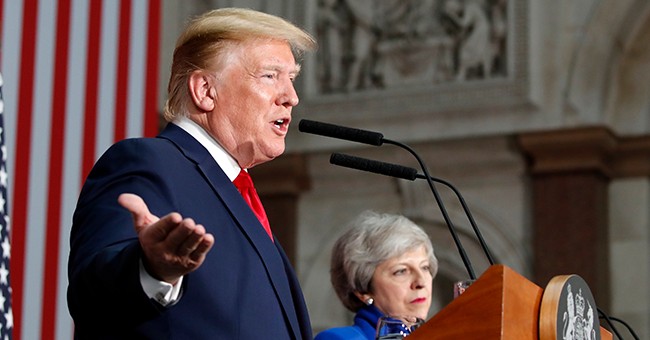 President Trump doubled down on his criticism of left-wing British politicians during a press conference with outgoing Prime Minister Theresa May Tuesday morning.

Responding to a question from a British reporter about his criticism of London Mayor Sadiq Khan and British opposition leader Jeremy Corbyn, Trump described them as "negative forces." He also said Corbyn wanted to have a meeting with him but he declined.

"I don't know Jeremy Corbyn, never met him, never spoke to him, he wanted to meet today or tomorrow and I decided I would not do that," Trump told reporters.

On Khan, Trump said "I don't think he should be criticizing a representative of the United States that can do so much good for the United Kingdom."

Earlier in the press conference the two leaders discussed the strong alliance between the United States and the United Kingdom, trade, NATO, Iran, and more.

In opening statement at joint press conference, PM May says she celebrates the "special relationship" and "enduring partnership" between the US and UK. She calls it a "precious and profound friendship." pic.twitter.com/0OkfDiYMyh

The PM says she and @POTUS today discussed the importance of working together to restrict Iran's destabilizing activity and make sure Iran cannot acquire nuclear weapons, though she concedes US and UK have different views on how to achieve this. pic.twitter.com/PYJjSvbJNB

Pres Trump says he's honored to be back in Britain. Said last night's State Banquet in his honor was "lovely," and he calls The Queen "a fantastic person," and thanks her for the invitation to make a State Visit. pic.twitter.com/kdhdKPKSX8

Pres again demands that all members of @NATO fulfill their financial oblifations to the alliance. "They have no choice," he says, "they must fulfill their obligations.” pic.twitter.com/eOcvLrKVrn

Pres Trump also commits to negotiating a "phenomenal" trade deal between the US and UK. He expects it will have tremendous results for both nations. pic.twitter.com/iCKnl8gIAR

"I think you deserve a lot of credit," Pres tells PM May, just three days before she steps down for failure to deliver on a Brexit deal. As for her possible successor, Pres says he likes @BorisJohnson. "I think he'd do a very good job," Said same about @jeremycorbyn. pic.twitter.com/ImVtqiypEz

Watch the entire press conference below: