Barbara Bush Had Some 'Nasty' Criticisms of Trump. Here's What He Had to Say About It. 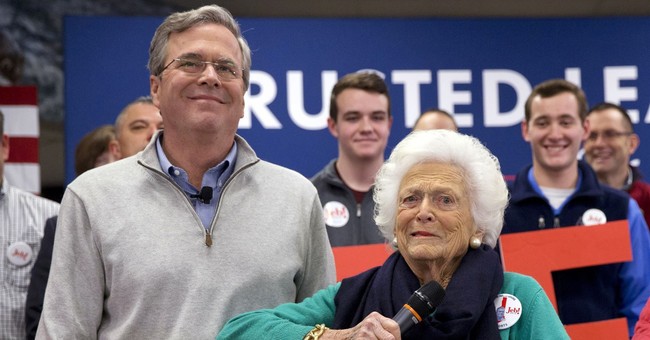 President Trump responded to the late first lady Barbara Bush’s harsh criticism of him in a newly release biography, saying he understood why she made the comments.

“I have heard that she was nasty to me, but she should be. Look what I did to her sons,” Trump told the Washington Times in an interview.

In the biography, “The Matriarch: Barbara Bush and the Making of a Dynasty,” Bush refers to Trump as a "symbol of greed," according to its author, Susan Page.

And her criticism of him wasn’t just in recent times—in an entry from her diary in the 1990s, she said “Trump now means greed, selfishness and ugly. So sad.”

That remark was in response to Trump criticizing her late husband, former President George H.W. Bush, at a charity event.

Of course, Bush, who died one year ago this month, had much more to say during the 2016 election cycle.

In that book, Bush blamed Trump for aggravating her long battle with congestive heart failure and chronic pulmonary disease. Bush also told Page that she'd "probably say no" when asked if she still considered herself a Republican. …

"I'm trying not to think about it," Barbara Bush said in an interview that took place in 2018 as the first anniversary of Trump's election approached. "We're a strong country, and I think it will all work out.” (USA Today)

“Look, she’s the mother of somebody that I competed against,” Trump said. “Most people thought he [Jeb Bush] was going to win and he was quickly out.”

Trump then brought up South Carolina primary, where Bush finished behind the top three candidates, prompting him to suspend his campaign.

According to Page, Bush’s “long battle with congestive heart failure and chronic pulmonary disease that hit her like a sledgehammer one day in June 2016" when Trump locked in the Republican nomination.

So sure was she that Trump would not succeed in becoming president that she had drafted a tongue-in-cheek letter to former President Bill Clinton, welcoming him to the club of first spouses. Of course, she never sent that letter because she woke up on Nov. 9, 2016 “and discovered, to my horror, that Trump had won.”