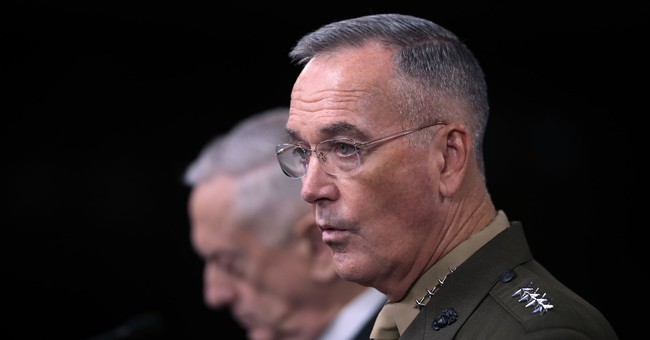 Marine Gen. Joseph Dunford, Chairman of the Joint Chiefs of Staff, said during a Senate Armed Services Committee Thursday that Google is helping China’s military more than it is helping America's military.

“The work that Google is doing in China is indirectly benefiting the Chinese military,” Dunford said.

“We watch with great concern when industry partners work in China knowing that there is that indirect benefit. Frankly, ‘indirect’ may be not a full characterization of the way it really is, it is more of a direct benefit to the Chinese military.”

Alarmed by what Dunford had told the committee, Republican Sen. Josh Hawley summarized the top general’s point: “We have an American company that does not want to do work with our Defense Department, which is one thing, but they’re happy to help the Chinese, at least the Chinese government that is, the Chinese military, at least indirectly. I think that’s just extraordinary,” he said.

Dunford’s comments come in the wake of the tech giants’ decision not to pursue some of the Pentagon’s lucrative contracts while considering projects in China.

In October, Google said it would no longer compete for the Pentagon’s Joint Enterprise Defense Infrastructure, or JEDI, cloud computing contract, an award that could be worth $10 billion. Google said that the contract may conflict with its corporate values. In addition, the company also said it would not renew a Pentagon contract that analyzed aerial drone imagery for the military.

Meanwhile, it was revealed last year that the tech giant was studying the idea of working with the Chinese government on “Project Dragonfly,” a censored search engine that would block certain sites and search terms. More recently, after pushback from politicians and activists, Google said it had dropped those plans. (CNBC)

Dunford wasn’t alone in his assessment of the situation, either.

“Five trillion dollars of their [China’s] economy is state-owned enterprises,” Shanahan said. “So the technology that has developed in the civil world transfers to the military world, it’s a direct pipeline. Not only is there a transfer, there is systemic theft of US technology that facilitates even faster development of emerging technology,” he said.