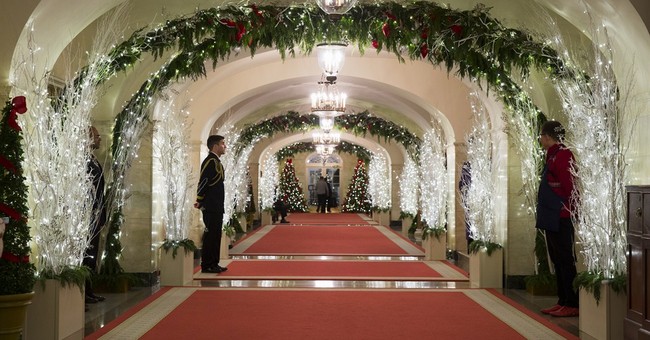 Members of the media will likely attend many holiday parties this season, but among them will not be the White House Christmas party, as President Trump has canceled the event, FoxNews.com reports.

The annual Christmas-season gathering was a significant perk for those covering the White House, as well as other Washington reporters, anchors and commentators, and New York media executives would regularly fly in for the occasion. At its peak, the invitation-only soirees grew so large that there were two back-to-back events, one for broadcast outlets and one for print organizations.  Journalists who attended the events, which featured a catered buffet of lamb chops, crab claws and elaborate desserts, got to roam the decorated mansion with a spouse or other family member, a friend or a colleague, adding to the invitation's allure.

But the biggest fringe-benefit was the picture-taking sessions, in which the president and first lady would patiently pose with guests and briefly chat with them in front of a Christmas tree, with the White House sending out the photos — copies of which were invariably sent home to mom. This would take a couple of hours, with long lines snaking across the building's first floor. Bill Clinton even posed for pictures with journalists days after he was impeached. (FoxNews.com)

Yes, it was. My guess is @realDonaldTrump simply hates standing in line and mugging with the journos for 3-4 hours. I always marveled at the stamina Christmas at the White House requires of @POTUS and @FLOTUS whichever their party and whomever is in the endless line for photos. https://t.co/cPvISmRx0C

While Trump has canceled the press Christmas party, a few supportive commentators (including at Fox) have been invited to other WH holiday bashes https://t.co/4BnWO3W5YH

The move is no surprise given Trump's contentious relationship with major media outlets. For last two years he has also refused to go to the White House Correspondents' Dinner, which it is customary for presidents to attend.