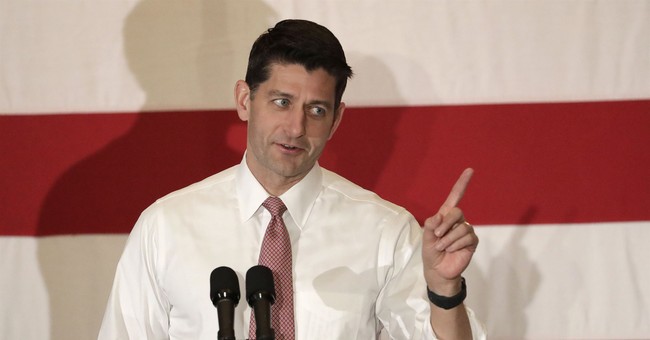 The state’s election system “defies logic to me,” he said during an interview with the Washington Post’s Paul Kane. “We had a lot of wins that night, and three weeks later we lost basically every contested California race. This election system they have, I can’t begin to understand what ballot harvesting is.”

“We were only down 26 seats the night of the election and three weeks later, we lost basically every California race,” he continued. “This election system they have — I can’t begin to understand what ‘ballot harvesting’ is.”

He did not accuse the state of any wrongdoing and his campaign spokesman Jeremy Adler later clarified in a statement to The Hill that "The Speaker did not and does not dispute the [election] results."

“I just think it’s weird,” he said when pressed by Kane during the event.

California does have a more liberal policy when it comes to counting ballots. The Golden State allows absentee ballots to be counted if they are mailed by Election Day and arrive at the registrar by the Friday after the election. That’s why results in a handful of close California House races were not called until days, or weeks, after Nov. 6.

In many cases, the GOP candidates had been leading on election night, but Democrats ultimately prevailed as additional absentee and provisional ballots were tallied in the days after. (The Hill)

“In Wisconsin, we knew the next day. Scott Walker, my friend, I was sad to see him lose, but we accepted the results on Wednesday," Ryan said. California’s “system is bizarre; I still don’t completely understand it. There are a lot of races there we should have won.”

He called the way absentee-ballots work now “pretty loosey goose,” compared to how the program operated in the past.

“When you have candidates who win the absentee ballot vote and then lose three weeks later because of provisionals, that’s really bizarre. And so I just think that’s a very, very strange outcome,” he said.

“When you win the absentee ballots and you win the in-person vote, where I come from, you win the election,” Ryan added. “If you then — and you’re up six points or something like that, it’s really bizarre. So my only point is, I’m not saying there’s anything nefarious about it, because I just don’t know, but we believed we were up about six seats in California the night of the election, now I think we lost just about every single one of those.”

.@SpeakerRyan, in California we make sure every ballot is properly counted and accounted for. That's not “bizarre,” that's DEMOCRACY.https://t.co/zBXiAscmRK

“It shouldn’t ‘defy logic’ that elections officials are meticulous in counting every eligible ballot,” Padilla explained, the Mercury News of San Jose reported. “California works to ensure every ballot is counted properly and every ballot is accounted for. In the most populous state in the nation — and the state with the largest number of registered voters — this takes time.”

Democrats flipped the seats held by GOP Reps. Mimi Walters, Dana Rohrabacher, Jeff Denham and Steve Knight, and won those by retiring Republican Congressmen Ed Royce and Darrell Issa. The race in California's 21st Congressional District between GOP Rep. David Valadao and Democrat T.J. Cox is too close to call still, but Cox was ahead in the last update.