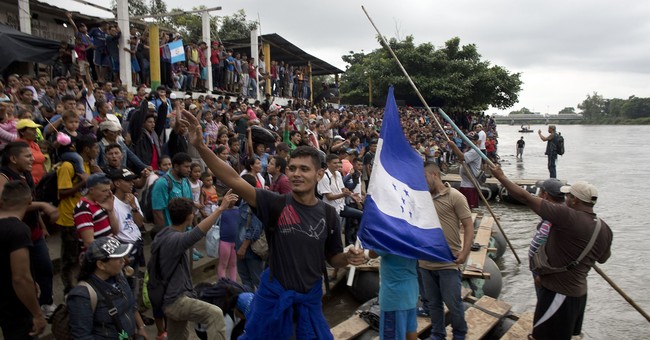 President Trump said Wednesday he’s willing to sending up to 15,000 troops to the U.S.’s Southern border in an attempt to stop the caravan of migrants heading northbound from Central America.

"As far as the caravan is concerned, our military is out. We have about 5,000. We'll go up to anywhere between 10 and 15,000 military personnel on top of Border Patrol, [Immigration and Customs Enforcement] and everybody else at the border," he told reporters outside the White House.

“Nobody is coming in. We’re not allowing people to come in,” he added.

This number of troops would be roughly equivalent to the U.S.'s military presence in Afghanistan, according to the Associated Press.

The comments come days after he sent 5,200 active-duty troops to “harden the southern border."

“We’re bringing in military police units. We’re bringing in strategic airlift,” U.S. Northern Command Commander Air Force Gen. Terrence O’Shaughnessy said Monday. “As we sit right now, we have three C-130s and a C-17 that is ready to deploy with [Customs and Border Protection] personnel wherever they need to be.”

Those first troops are coming from Fort Knox and Fort Campbell, both in Kentucky, and will eventually be augmented with aviation support from three medium-lift helicopter companies and three combat engineer battalions. In all, the forces headed to the border total about 5,200 and would be deploying by the end of the week, O’Shaughnessy said.

These troops joined more than 2,000 National Guard forces already sent to the border this year by Texas, New Mexico, Arizona, and California.

O’Shaughnessy said his command would comply with the Posse Comitatus Act, “which prohibits federalized troops from conducting domestic law enforcement,” according to Military Times.