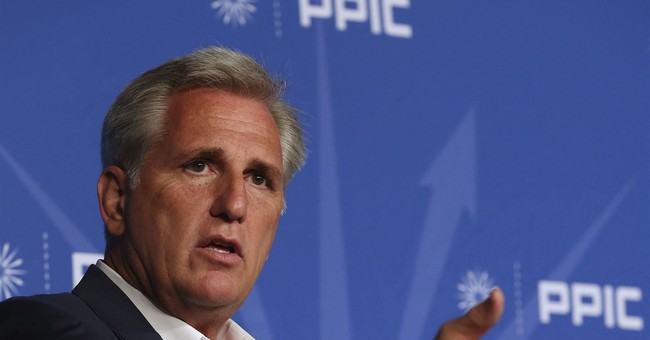 McCarthy posted photos of the incident from a security camera on his Instagram account, asking if anyone could identify the suspects.

“Does anyone know these two guys?” he wrote. “They threw a boulder thru our office window and took office equipment.”

Does anyone know these two guys? They threw a boulder thru our office window and took office equipment.

The attack on McCarthy's office is the latest in a slew of incidents predominantly targeting Republicans. A fire was set at a county Republican Party office in Wyoming last month and vandals smashed windows and graffitied the doors of the Metropolitan Republican Club in Manhattan earlier this month.

These incidents of property damage and theft have occurred alongside the physical harassment, threats, and doxxing of several Republican lawmakers and administration officials.

Earlier this month, for example, it was revealed that a Democratic congressional aide accused of publishing the private information of at least three Republican lawmakers also allegedly threatened to leak senators’ children's health information if a witness told anyone about his activities.

And prominent Republicans, including Sen. Ted Cruz, R-Texas, and Senate Majority Leader Mitch McConnell, R-Ky., have been harassed in recent weeks while eating at public restaurants with their wives by hostile liberals. Other top GOP officials, such as Homeland Security Secretary Kirstjen Nielsen, were similarly accosted over the summer, although Nielsen's security detail kept the protesters at bay. (FoxNews.com)