Cotton: Schumer's 'Political Operation' Was Behind Release of Ford's Letter From the Beginning 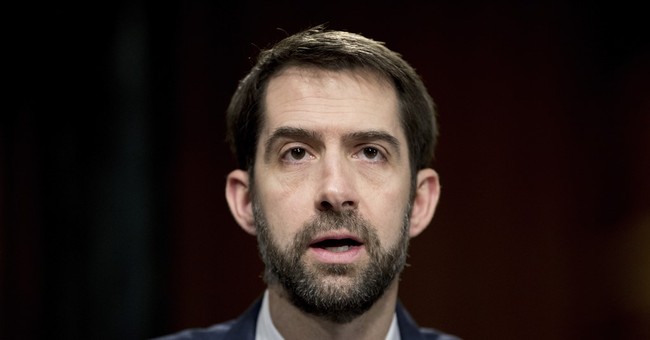 “I believe the Schumer political operation was behind this from the very beginning,” he told radio host Hugh Hewitt. “We learned last week that a woman named Monica McLean was Ms. Ford’s roommate, and she was one of the so-called beach friends who encouraged Ms. Ford to go to Dianne Feinstein and the partisan Democrats on the Judiciary Committee.”

Cotton then pointed out the connection between McLean and Democrats in the Beltway.

“It just so happens that Monica McLean worked for a Preet Bharara, the former U.S. Attorney in Manhattan, now a virulent anti-Trump critic on television and former counsel to Chuck Schumer. So I strongly suspect that Chuck Schumer’s political operation knew about Ms. Ford’s allegations as far back as July and manipulated the process all along to include taking advantage of Ms. Ford’s confidences and directing her towards left-wing lawyers who apparently may have violated the D.C. code of legal ethics and perhaps may face their own investigation by the D.C. Bar.”

During last Thursday’s hearing, Ford was unaware of the Senate Judiciary Committee’s offer to send staff to California to interview her. When she was asked if her attorneys informed her about this offer, her lawyers objected to her responding to the question.

The Senate Judiciary Committee noted that this could be a violation of the American Bar Association’s rules.

“The ABA’s Model Rules of Professional Conduct require a lawyer to consult with his or her client about the means to be used to accomplish the client’s objectives—including informing the client of settlement offers,” the Committee stated. “It is deeply unfortunate that Dr. Ford’s Democratic-activist lawyers appear to have used Dr. Ford in order to advance their own political agenda. A lot of pain and hardship could have been avoided had Dr. Ford’s attorneys informed her of the committee’s offer to meet her in California to receive her testimony.”