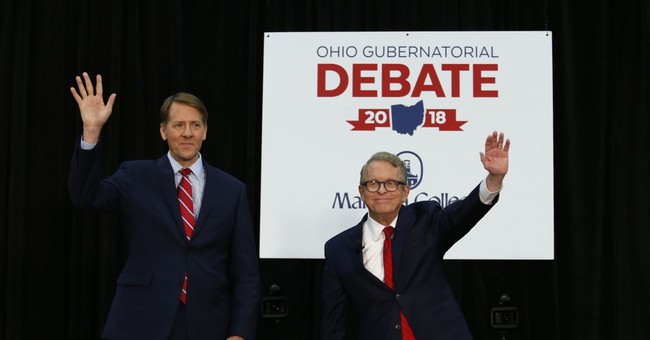 Ohio Republican Attorney General Mike DeWine and Democrat Richard Cordray faced off in their second—and very conventional—debate on Monday, which was quite a contrast compared to the combative political debates the country is embroiled in at the national level.

The two men squared off on issues ranging from healthcare and guns to rape kits and algae blooms (yes, really). What was noticeably absent from the debate were mentions of President Trump and Judge Brett Kavanaugh. As The New York Times explained, “this race is almost a throwback to a time when state politics was more localized and less about what is going on in Washington.”

All the questions came from the live audience or social media, so they were issues voters clearly cared about.

On the topic of civility, one Ohioan wanted to know how the two men, if elected, would “mend the fence.”

"A lot of this poor tone, divisiveness and pitting people against each other is coming out of Washington," Cordray responded. "I want to stand for politics that we can respect and be proud of. I want to stand for being able to reach across the aisle and get things done."

DeWine, meanwhile, said "throughout my career, I've pulled people together. I'm a problem solver, but I don't solve the problems by myself."

On ECOT, the online charter school that closed earlier this year owing millions to the state because it overinflated student attendance, DeWine said: “I’m the only person on this stage who’s taken any action against ECOT. Mr. Cordray was the attorney general before I was the attorney general. There was an audit done by the auditor of this state that showed that there could be a conflict – he took no action. We took action in the appropriate time.”

Cordray said when he was attorney general the Ohio Supreme Court ruled that officials from failing charter schools could be held responsible for money lost but DeWine didn't follow through on that. He claimed this was because DeWine received contributions from ECOT officials.

DeWine also said that it was Cordray and not him who got donations from ECOT founder Bill Lager when the two faced each other in the attorney general’s race in 2010, and that Cordray hadn’t returned the money.  Cordray said the total was $600 and he’d given it back to his local school district. (WKSU)

On right-to-work legislation, the two men shared more in common than on other issues.

DeWine said he would veto this type of legislation: “This is not a debate or a fight that we need. Ohio has many issues and many challenges that Mike DeWine and Jon Husted want to deal with when we take office. We do not need the divisiveness of a fight like this that would take place.”

Cordray, for his part, said he'd veto right-to-work legislation as well, although he expanded on his position.

On guns, both said they were supportive of efforts to put more law enforcement officers in schools. DeWine said that he would add mental health services; while Cordray explained he supports a ban on bumpstocks and making the background check system more extensive.

The two men are neck-and-neck in polling, according to RealClearPolitics's average, which has Cordray up 3 points. They will next face off in Cleveland on October 8.