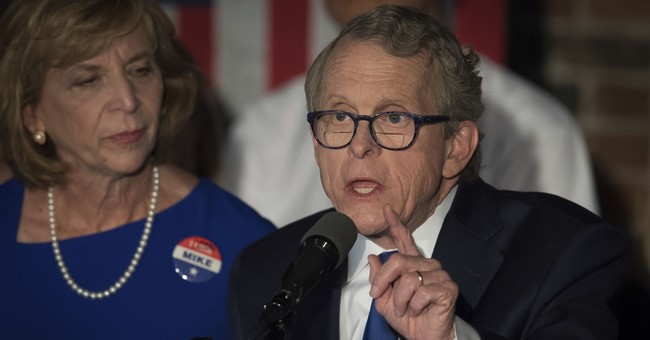 Ohio gubernatorial candidates Mike DeWine and Richard Cordray faced off Wednesday in their first debate at the University of Dayton.

The issues DeWine, the state's Republican attorney general, and Cordray, his Democratic challenger, took on during the hour-long debate presented Ohioans with a stark contrast.

DeWine portrayed Cordray as incompetent, while Cordray, the former head of the Consumer Financial Protection Bureau, painted DeWine as a career politician who has failed voters in the past and is tied to special interests and an antiquated way of thinking.

“You have been living in the past and you are still living in the past,” Cordray charged after DeWine brought up some of the problems that have been associated with the legalization of recreational marijuana. “Marijuana has been legalized in multiple states and they have been working through these issues,” he added. “When I go to the ballot, I will cast my vote yes.”

Cordray hit DeWine for his handling of the opioid epidemic in Ohio, which has hit the state particularly hard.

“You’ve been in charge of this opioid crisis for the last eight years,” Cordray said. “That we would listen to you for advice on the drug epidemic would be like listening to the captain of the Titanic.”

DeWine took the opportunity to attack Cordray for his support of Issue 1, which would weaken Ohio’s drug laws, letting a dealer carrying 19 grams of fentanyl—enough to kill 10,000 people—get off with a misdemeanor and no jail time.

Cordray also said he’d veto a heartbeat bill, which would ban abortion after a heartbeat is detected—a measure Republican Gov. John Kasich vetoed in 2016. “He has said he will sign it,” Cordray said about DeWine’s pro-life position. “That is a fundamental difference between us.”

“I believe that government exists to protect the most vulnerable people,” DeWine said. “That includes the unborn as well as the born. I think for any woman in a troubled pregnancy, we have to work with her, we have to help her, we have to give her any assistance we can.”

When pressed to take a specific position on whether he’d sign a heartbeat bill, DeWine said he would.

Speaking to reporters after the debate, DeWine discussed the drastic difference between him and Cordray.

Cordray also emphasized their differences when speaking to reporters.

"We wanted to paint the contrast between myself and Mike DeWine," he said at a news conference after the debate. "For 42 years, he has sided with corporate interests and special interests, and I've been somebody who has fought those same interests. There is really a stark divide between us, and we really wanted to make that clear to people."

The race is currently a toss-up, with Cordray up 1.6 points, according to RealClearPolitics’s average of polls.

Share this on Facebook
Tweet
Project Veritas Video Shows CNN Staffer Revealing How Network Manipulates Guests
Leah Barkoukis
Brace Yourselves, Black Reparations Is About to be a Debate Topic on the Hill
Matt Vespa
Uh Oh: Democrats are Bleeding Support with One of Their Key Voting Blocs
Matt Vespa
Former CNN Producer Rips into Media for Trying to Have It Both Ways on COVID Vaccine
Matt Vespa
House Democrats Try for DC Statehood (Again) Without First Checking Constitution
Spencer Brown
Fauci's Response to Tucker Carlson on COVID Vaccines Is Appalling in its Lack of Self-Awareness
Matt Vespa
CARTOONS | Tom Stiglich
View Cartoon
Most Popular