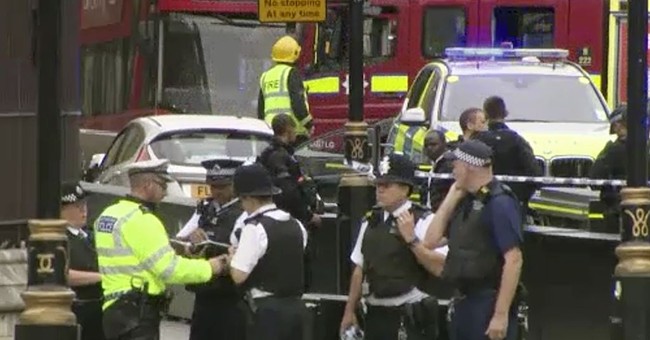 London’s Metropolitan Police are treating a car that rammed into pedestrians and barriers outside Parliament as a terror incident.

The suspect, said to be in his late 20s, was arrested after driving a silver Ford Fiesta through a crowd before going into the opposite lane and crashing into security barriers.

Two people were taken to the hospital with “injuries that are not believed to be serious,” a London Ambulance Service spokesman said, reports BBC.

According to one eyewitness:

Barry Williams, a BBC member of staff based at Millbank, said: "I heard lots of screams and turned round.

"The car went onto the wrong side of the road to where cyclists were waiting at lights and ploughed into them.

"Then it swerved back across the road and accelerated as fast as possible and hit the barrier at full pelt.

"It was a small silver car and he hit it at such speed the car actually lifted off the ground and bounced.

"Then the police just jumped. Two officers managed to leap over the security barriers and then the armed police vehicles all sped towards the scene." (BBC)

"My thoughts are with those injured in the incident in Westminster and my thanks to the emergency services for their immediate and courageous response," British Prime Minister Theresa May tweeted.

"My thoughts are with those injured in the incident in Westminster and my thanks to the emergency services for their immediate and courageous response." - PM @theresa_may

London Mayor Sadiq Khan meanwhile said he “utterly condemn[s] all acts of terrorism on our city.”

A man has been arrested after a car was driven into barriers outside the Houses of Parliament. Police have confirmed that the incident is being treated as a terrorist act. All Londoners, like me, utterly condemn all acts of terrorism on our city. https://t.co/9gFu3HYtae