Giuliani on Russia Investigation: 'It's Going to Blow Up' on Mueller 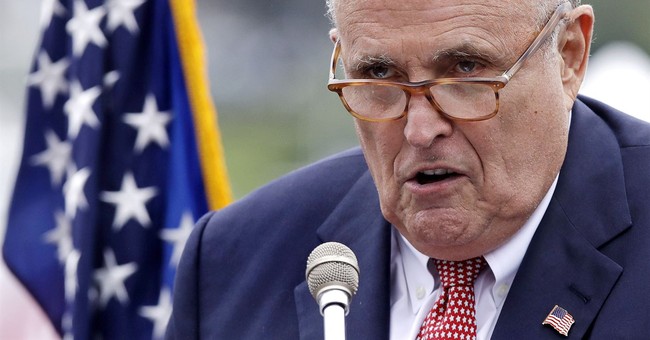 President Trump’s personal attorney Rudy Giuliani predicted the Russia investigation is “going to blow up on” special counsel Robert Mueller and the Democrats who encouraged it, saying the probe will likely be over by September.

“The reality is, the real story here is not that this case is going to fizzle, it’s going to blow up on them. The real question is what we talked about before, there’s a lot more to what they did that nobody knows about yet,” he told Fox News’ Sean Hannity. “A lot more to the obstruction of justice, to the collusion, to the fake dossier. Trying to bring Steele back in after he was completely discredited.”

"I know some of it," Hannity said.

Giuliani explained the only collusion in the case is by the intelligence community, which used the dossier to obtain “several fraudulent FISA wires.”

"Can it get any worse? I mean, what do we need to know that this is a totally illegitimate investigation based on a report, a dossier that was paid for by Hillary Clinton and the Democrats -- probably the biggest illegality so far, the biggest collusion so far. Completely made up. Completely made up. Led to nothing except several fraudulent FISA wires," Giuliani said.

Giuliani called the investigation “a different kind of Watergate” and said Mueller will “have a lot to answer for.”

“I said a long time ago, the investigation here has to be of the investigators, because we can't let this happen again in American history. We may not have a president as strong as President Trump. A lesser president could have really been cracked by this.”