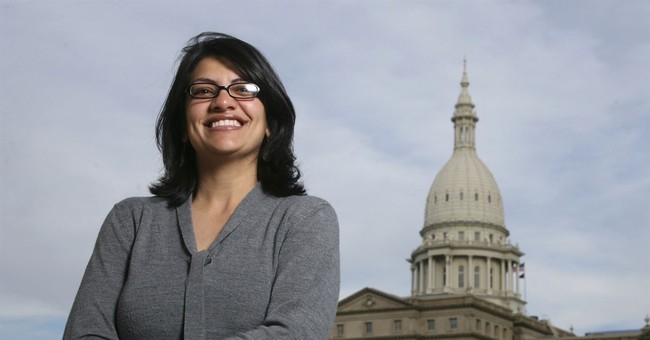 Tlaib defeated five other candidates in the Democratic Party, but since no Republicans or third-party candidates ran for the seat vacated by former Democratic Rep. John Conyers, she will run unopposed, starting her term after the November election.

Not surprisingly, Tlaib has been a vocal critic of President Trump, and was forcibly removed from a Detroit luncheon two years ago for heckling then-candidate Trump.

Security officers and police removed 14 protesters, including former State Rep. Rashida Tlaib, D-Detroit, after they began shouting at Trump as he laid out his economic plan to the typically buttoned-down business crowd. All but one of the protesters was a member of the Michigan Peoples Campaign, a statewide activist group that advocates for economic and racial justice. […]

Tlaib, who was the first Muslim woman in to serve in the Michigan Legislature, told the Free Press that as a mother and a Muslim, she felt obligated to demand that Trump be a better example for children.

"We need to be heard ... you cannot stay silent," Tlaib said Monday. "He doesn't love Detroit. He doesn't love no one who isn't Donald Trump." (Detroit Free Press)

She later defended her actions in a Detroit Free Press op-ed, saying she’s “heard critics calling it unbecoming of a former state legislator …[but she believes] it is unbecoming of any American to not stand up to Trump’s hate-filled rhetoric and tactics.”

Tlaib also vowed in April to push the impeachment of Trump if she were elected.

“I keep telling people this is about electing a jury that will impeach him, and I make a heck of a juror,” she told The Hill.

And if there were any question of how progressive Tlaib’s is, her campaign manager, Andy Goddeeris, likened her to the new darling of the left, Alexandra Ocasio-Cortez.

"We are basically running the same campaign, with the same platform and with a very similar candidate," he said.