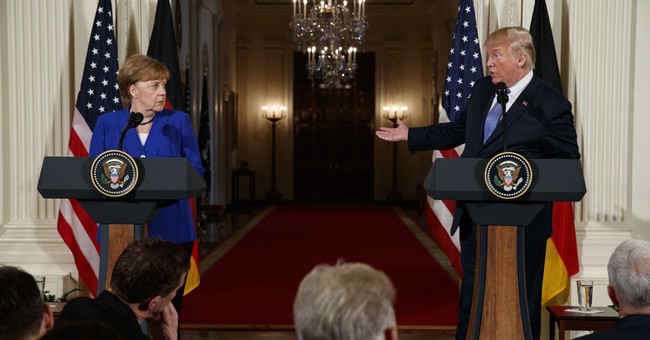 German Chancellor Angela Merkel was quick to defend her country after President Trump criticized its energy deal with Russia during a breakfast meeting with NATO’s secretary general Wednesday.

"I have experienced myself how a part of Germany was controlled by the Soviet Union," she said, referring to growing up in communist East Germany, reports Reuters. "I'm very glad that today we are united in freedom, the Federal Republic of Germany. Because of that we can say that we can make our independent policies and make independent decisions."

Merkel was pushing back at Trump’s assertion that Germany was “totally controlled” by and “captive” to Russia over a pipeline project that would import gas from Russia.

"So we're supposed to protect you against Russia but they're paying billions of dollars to Russia and I think that's very in inappropriate," Trump said. "And the former Chancellor of Germany is the head of the pipeline company that is supplying the gas. Ultimately, Germany will have almost 70% of their country controlled by Russia with natural gas. So, you tell me, is that appropriate?”

Merkel countered by noting that Germany is one of the biggest troop contributors to NATO missions.

Trump will meet with Merkel Wednesday afternoon, according to White House Press Secretary Sarah Huckabee Sanders. That meeting will be closed to the press, however.