Now a Senate Dem Is Calling to Abolish ICE 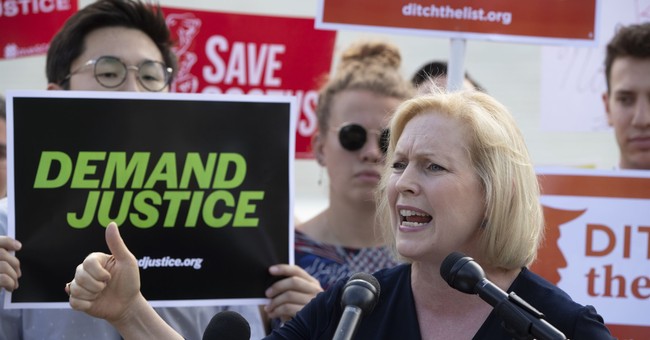 While calls to abolish Immigration and Customs Enforcement has been gaining steam among the left, particularly in the House, Sen. Kirsten Gillibrand (D-NY) has now joined the bandwagon, making her the first sitting senator to argue for eliminating the agency.

In an interview with CNN, host Chris Cuomo asked Gillibrand what she thought of calls by Alexandria Ocasio-Cortez, the 28-year-old socialist who ousted Rep. Joe Crowley in this week’s primary, to abolish ICE.

On her campaign website, Ocasio-Cortez's position on abolishing ICE is explained:

As overseen by the Trump administration, ICE operates with virtually no accountability, ripping apart families and holding our friends and neighbors indefinitely in inhumane detention centers scattered across the United States. Alex believes that if we are to uphold civic justice, we must abolish ICE and see to it that our undocumented neighbors are treated with the dignity and respect owed to all people, regardless of citizenship status.

Gillibrand told Cuomo she was supportive of the proposal.

“Well, I agree with it. I don’t think ICE today is working as intended,” she said.

"I believe that it has become a deportation force. And I think you should separate out the criminal justice from the immigration issues," she continued. "I think you should reimagine ICE under a new agency, with a very different mission, and take those two missions out. So we believe that we should protect families that need our help, and that is not what ICE is doing today."

"And that's why I believe you should get rid of it, start over, reimagine it and build something that actually works," she added.

Democrat @SenGillibrand: “I believe you should get rid of [ICE], start over, reimagine it, and build something that actually works #CuomoPrimeTime https://t.co/3SwLWVK0Fa pic.twitter.com/HnpFj19w0z