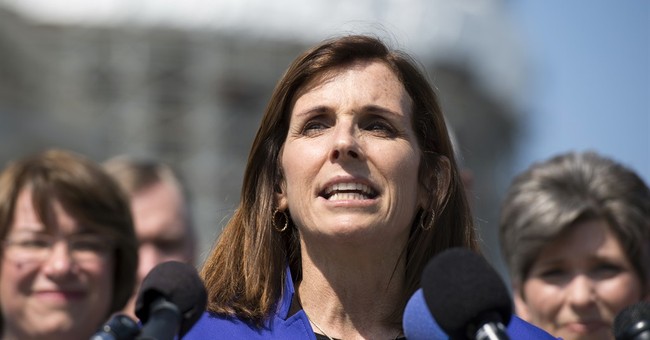 While her formal announcement will come in a tour across the state Friday, her campaign released a video ahead of time showing her as someone not afraid to take on the establishment, Sharia law, and who will push for border security.

“Like our president, I’m tired of PC politicians and their BS excuses,” she said in the video. “I’m a fighter pilot and I talk like one.”

“That’s why I told Washington Republicans to grow a pair of ovaries and get the job done,” she added. “Now, I am running for the Senate to fight the fights that must be won — on national security, economic security and border security.”

McSally, a retired Air Force colonel, will fly herself across the state announcing her candidacy in Prescott, Phoenix, and Tucson.

“I absolutely refused to bow down to Sharia law,” she said in the video referencing her successful challenge to a military policy that required her to wear an Islamic robe over her Air Force uniform. “After eight years of fighting, I won my battle for the religious freedom of American servicewomen.”

She added, “After taking on terrorists in combat, the liberals in the Senate won’t scare me one bit.”

But will she convince conservatives?

She refused to endorse Trump in the 2016 presidential campaign. “That’s just not how leaders carry themselves,” she said at the time.

Yet she has tacked right in recent months and aligned herself with Trump as the 2018 campaign season neared. (Washington Times)