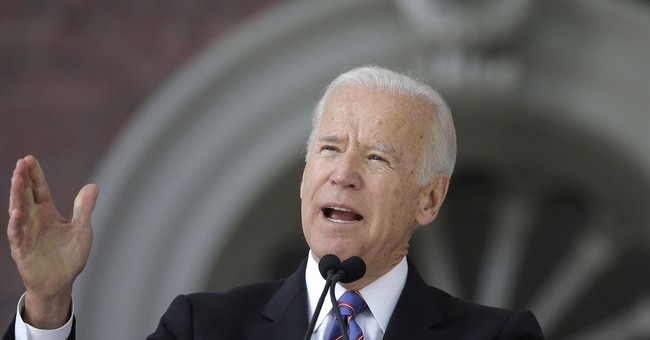 During an interview with CBS’s Gayle King, who asked if there was anything he believed the Trump administration is doing well, Biden pointed to North Korea.

“I do think they are doing a decent job at the U.N. with regard to North Korea. I think there’s a number of things that are on the cusp of doing good things with,” Biden answered.

"This is the time to engage and have more diplomacy," he suggested.

Nikki Haley, United States Ambassador to the United Nations, has pushed hard for a tougher stance toward North Korea, and in September, the world body unanimously passed its toughest-ever sanctions against Pyongyang.

“Today, we are attempting to take the future of the North Korean nuclear program out of the hands of its outlaw regime,” she said at the time.

“Today, we are saying the world will never accept a nuclear-armed North Korea,” she added. “And today the Security Council is saying if North Korea does not halt its nuclear program, we will act to stop it ourselves.”

Biden’s praise didn’t last long, however. He quickly pivoted to Trump’s leadership style, saying the president is "devoid of any depth of knowledge in foreign policy," adding that he's "not a student of detail."

"I wish the president would be president and stop being so consumed with himself and his image,” Biden lamented.