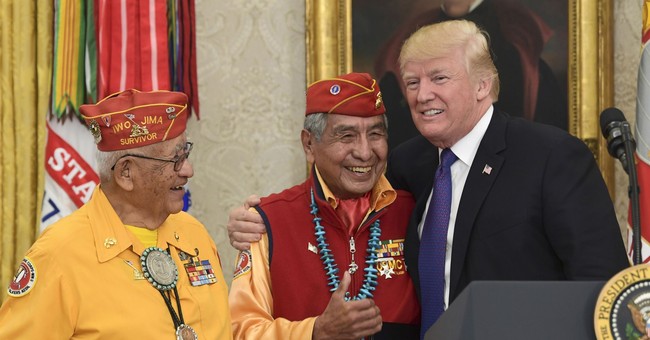 While the liberal media continues to pile on President Trump over referring to Democratic Sen. Elizabeth Warren as “Pocahontas” during an event honoring Native American veterans, it seems one of the only people that truly has a right to weigh in on the issue didn’t seem to mind.

When asked by CNN political analyst Joshua Green whether he was offended by the president’s remark, Marine Corps veteran Thomas Begay said he was not, only that he was “puzzled” by it.

He also told Green that while he was serving in the Marines he was forced to yell “Geronimo” but that didn’t bother him either.

Geronimo, used as a battle cry for paratroopers jumping out of a plane, was an Apache Indian chief.

Just met Thomas Begay who was "puzzled" but not offended by Trump's Pocahontas quip: "The Marines made us yell 'Geronimo' when we jumped out of planes + that didn't offend me either." pic.twitter.com/6wOonggocE

"I just want to thank you because you're very, very special people," Trump said Monday at the event honoring the Code Talkers. "You were here long before any of us were here, although we have a representative in Congress who, they say, was here a long time ago.  They call her [Elizabeth Warren] 'Pocahontas,'" he added. "But you know what, I like you because you are special.  You are special people.  You are really incredible people.  And from the heart, from the absolute heart, we appreciate what you've done, how you've done it, the bravery that you displayed, and the love that you have for your country."

Warren immediately slammed the president for using a “racial slur” during an appearance on MSNBC shortly afterward.

“It is deeply unfortunate that the president of the United States can’t even make it through a ceremony honoring these heroes without throwing out a racial slur,” the Massachusetts senator said.

“This was supposed to be an event to honor heroes, people who put it all on the line for our country,” Warren added.

Hours later, however, she was quick to use the president’s remark to fundraise.

Trump refers to Warren as ‘Pocahontas’ because she falsely claimed to be Native American until becoming a tenured Harvard professor—a point White House Press Secretary Sarah Huckabee Sanders pointed out to the outraged press corps.

“I think what most people find offensive is Sen. Warren lying about her heritage to advance her career," she told reporters Monday.