Trump Changes His Tune on North Korea, Urges Pyongyang to ‘Come to the Table’ for Negotiations 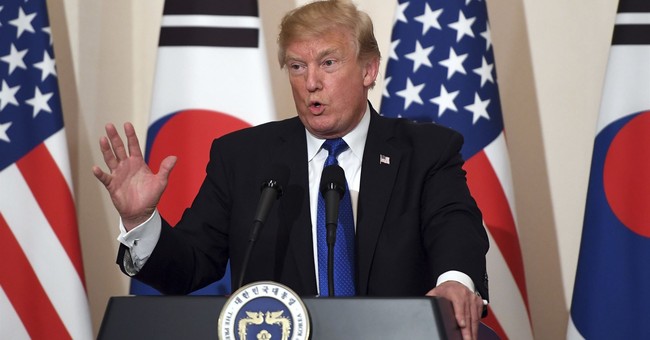 Despite saying recently that his Secretary of State Rex Tillerson is “wasting his time trying to negotiate with Little Rocket Man,” President Trump sounded more optimistic about North Korea on Tuesday and signaled that negotiations may be the best next step.

“It makes sense for North Korea to come to the table and make a deal that is good for the people of North Korea and for the world,” he said during a news conference with South Korean President Moon Jae-in. “I do see certain movement.”

Trump also noted that he’s seen “a lot of progress” on the issue and said “ultimately, it’ll all work out.”

A day earlier in Japan, Mr. Trump spoke of the potential for “something very special” happening with North Korea if the regime would return Japanese citizens it abducted many years ago. ...

Pyongyang has advanced its weapons program this year, launching its first intercontinental ballistic missiles in July and carrying out its sixth nuclear test a few weeks later.

The president’s comments came on the third day of a 10-day trip to Asia, in which the North Korean threat is featuring prominently in discussions with regional leaders. During the five-country tour, the former real-estate executive has assumed the role of lead salesman for the U.S. defense industry.

He touted the accuracy of antimissile systems on Air Force One leaving Washington, pushed Japanese Prime Minister Shinzo Abe to buy “massive” amounts of military equipment, and, on Tuesday, repeatedly said the U.S. makes the “greatest military equipment in the world.”

“South Korea will be ordering billions of dollars of that equipment, which, frankly for them, makes a lot of sense,” Mr. Trump said. “For us, it means jobs, it means reducing our trade deficit with South Korea.”

North Korea has yet to respond to Trump’s latest comment.