McCain: Trump Never Apologized For Saying I Am Not a War Hero 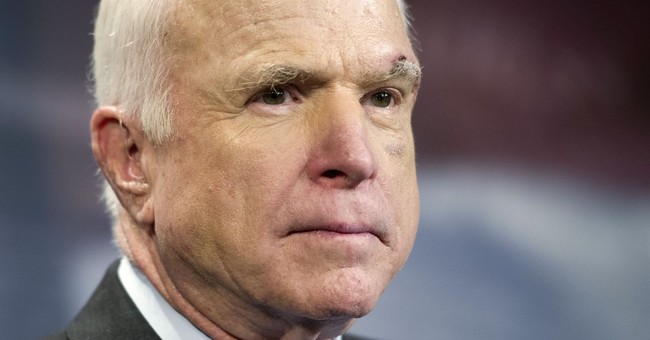 Sen. John McCain said President Trump has never apologized for disparaging comments he made about the Arizona Republican on the campaign trail.

"He was a war hero because he was captured," he added. "I like people who weren’t captured."

McCain, who was a prisoner of war in Vietnam for more than five years after his plane was shot down during combat, sustained permanent injuries from being tortured, leaving the veteran unable to raise his arms very high.

Nevertheless, when asked by CBS’s Lesley Strahl on Sunday’s edition of “60 Minutes” if McCain would be open to “rapprochement” with Trump, he said he would.

“But personal,” Stahl responded. “I’m talking about man to man.”

“Personal? Sure,” McCain answered. “I’d be glad to converse with him. But I also understand that we’re very different people.”

Trump, McCain said, has been “in the business of making money” while he was “raised in the concept and belief that duty, honor, country is the lodestar for behavior that we have to exhibit every single day.”

Strahl also wanted to know if McCain’s no vote that killed the GOP’s last effort to repeal Obamacare was “more like a middle finger” to get back at Trump.

McCain assured the host it was not.

“If I took offense at everybody who has said something about me, or disparaged me or something like that — life is too short,” he said. “You’ve got to move on. And on an issue of this importance to the nation, for me to worry about a personal relationship, then I’m not doing my job.”