Hillary to Dems Who Want Her to Fade Away: 'I'm Not Going Anywhere' 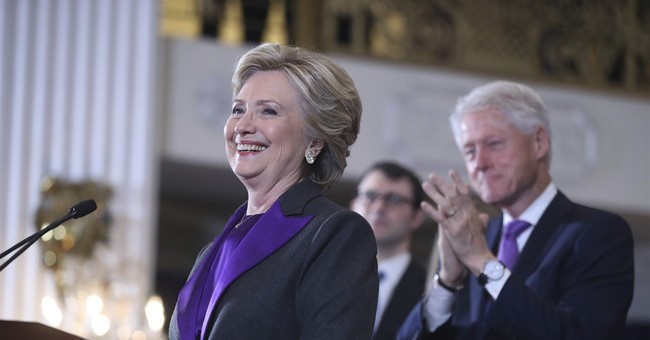 Hillary’s got a new book out, “What Happened,” that explains her 2016 election loss and blames just about everyone and everything for her defeat to Donald Trump. A lot of Democrats aren’t too pleased with her continued efforts to be in the limelight and wish she would just bow out of public life. Piers Morgan even excoriated the former secretary of state Thursday in an editorial, in which he described her book as an “elongated case for the defense of abject failure.”

“Hillary is doing herself no favors with this prolonged, agonizing Loser tour,” he wrote. “In fact, with every new appearance she makes to complain ever more bitterly about the unfairness of her defeat, and to blame an ever longer list of people other than herself for it, she is further diminished.

“More worryingly for the Democrats, what she is doing is causing huge damage to the party's chances of rebounding from the catastrophe of last November.”

Morgan, like other Democrats, begs Clinton to pack it up and stop talking before she takes the Democratic Party down with her.

Clinton shrugged off a question by NPR’s Rachel Martin if she’s “reconciled that, that people might not want you around as the party steps forward.”

“Well, they don’t have to buy my book, and they can turn off the radio when they hear me talking. I’m not going anywhere,” Clinton said.

“I have the experience, I have the insight, I have the scars that I think give me not only the right, but the responsibility to speak out. And 2018 is going to be incredibly momentous. We have a chance I won 24 congressional districts that have a Republican member of Congress sitting in them. And I think that gives us some idea that maybe, if we are really focused we have a chance to pick up seats, maybe take back the House. We’ve got to defend the Democratic senators,” she added.

Clinton said she has a lot of ideas for how to do that and people are already seeking her input going forward.

“There will always be the naysayers,” she continued. “I understand that and most of them as you might notice are anonymous, but that’s fine. But I’m responding to a very large outpouring of people who want to know what I have to say, who are excited that I’m not going to be, you know, slipping away into the background, but going to stay front and center, doing what I can to try to speak out on behalf of this country that I love, and just want to do everything I can to make sure it’s strong going forward.”

The majority of Americans disagree, however.

According to a Rasmussen poll published the same day as Clinton’s book release, 61 percent of likely voters think it’s time for her to retire.