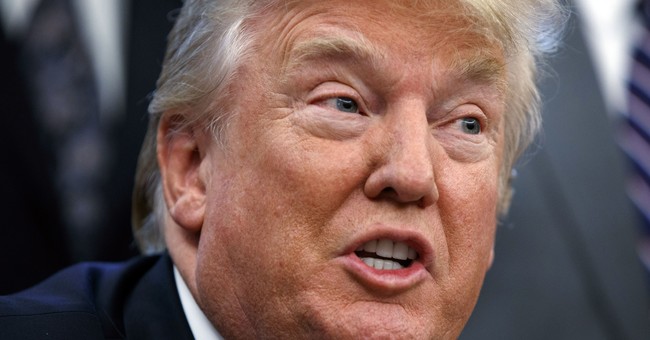 The Justice Department has given special counsel Robert Mueller a copy of the letter President Trump drafted with his rationale for firing former FBI Director James Comey, according to a New York Times report.

However, White House counsel Don McGahn ended up blocking the letter, which was written with adviser Stephen Miller, because he believed its “angry, meandering tone” was an issue.

Ultimately, the president’s draft was sent to Deputy Attorney General Rod Rosenstein, who wrote a letter of his own that was used by the Trump administration as reason for firing Comey.

The draft is significant, however, because the reasons for firing Comey are believed to be a significant focus of Mueller’s investigation.

Rosenstein's primary rationale for firing Comey had to do with the “Director’s handling of the conclusion of the investigation of Secretary Clinton’s emails.” He also said the “FBI’s reputation and credibility have suffered substantial damage” under Comey.

The New York Times did not see a copy of the letter, so it is unclear how much of Trump’s draft focused on the Russia investigation.

But Trump told NBC’s Lester Holt shortly after Comey’s firing that he had already made up his mind about letting the director go, even before receiving Rosenstein’s letter. He did indicate in the interview that the Russia probe was on his mind.

“Regardless of recommendation, I was going to fire Comey,” he said, adding "there was no good time to do it."

“And in fact, when I decided to just do it, I said to myself, ‘You know, this Russia thing with Trump and Russia is a made up story,’” he continued.

According to the report, McGahn did warn Trump that the Russia probe wouldn’t go away even if he fired Comey—a point the president acknowledged but said he wanted to do it anyway.

Mr. McGahn arranged for the president to meet in the Oval Office that day with Attorney General Jeff Sessions and Mr. Rosenstein, who he knew had been pursuing separate efforts to fire Mr. Comey. The two men were particularly angry about testimony Mr. Comey had given to the Senate Judiciary Committee the previous week, when he said “it makes me mildly nauseous” to think his handling of the Hillary Clinton email investigation might have had an impact on the 2016 election.

Mr. Comey’s conduct during the hearing added to concerns of Mr. Sessions and Mr. Rosenstein that the F.B.I. director had botched the rollout of the Clinton investigation and had overstepped the boundaries of his job. Shortly after that hearing, Mr. Rosenstein expressed his concerns about Mr. Comey to a White House lawyer, who relayed details of the conversation to his bosses at the White House.

During the May 8 Oval Office meeting with Mr. Trump, Mr. Rosenstein was given a copy of the original letter and agreed to write a separate memo for Mr. Trump about why Mr. Comey should be fired.

Mr. Rosenstein’s memo arrived at the White House the next day. The lengthy diatribe Mr. Miller had written had been replaced by a simpler rationale — that Mr. Comey should be dismissed because of his handling of the Clinton email investigation. Unlike Mr. Trump’s letter, it made no mention of the times Mr. Comey had told the president he was not under investigation. (NYT)

Trump referenced Rosenstein’s recommendations in his brief letter to Comey informing him of his termination on May 9, but added a point he believed was important: his private conversations with Comey in which the director told him he wasn’t under investigation.

“While I greatly appreciate you informing me, on three separate occasions, that I am not under investigation, I nevertheless concur with the judgment of the Department of Justice that you are not able to effectively lead the Bureau,” Trump wrote in the letter.