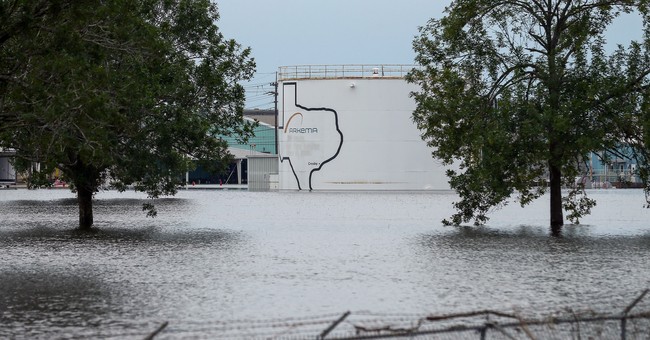 Two explosions were reported Thursday at a chemical plant in Crosby, roughly 25 miles from Houston, which was flooded from Hurricane Harvey.

The smoke forced one responding officer to seek medical attention for inhaling fumes, while at least 14 others also went to the hospital as a precaution. Many of them have since been released.

The Harris County Emergency Operations Center notified the company around 2 a.m. of explosions at the site and also reported black smoke coming from the area.

Officials had previously said they believed that sometime within the next several days chemicals at the plant would degrade and catch fire because the refrigeration storage and backup procedures had failed.

A mandatory evacuation within a 1.5-mile radius of the plant was already in effect. Government authorities are closely monitoring the situation along with the company. (USA Today)

Richard Rowe, the chief executive of the company’s North America unit, warned on Wednesday a fire would be likely.

"The most likely outcome is that, anytime between now and the next few days, the low-temperature peroxide in unrefrigerated trailers will degrade and catch fire," he said. “The high water and lack of power leave us with no way to prevent it.”

But Thursday’s explosions may not be the only ones since organic peroxide is stored in more than one location.

"Organic peroxides are extremely flammable and, as agreed with public officials, the best course of action is to let the fire burn itself out," the company said in a statement.

According to Arkema, the fires will resemble a large gasoline fire. It would be 'explosive and intense' and smoke would be released into the atmosphere and dissipate.

The preparations included having backup generators on site and diesel-powered refrigerated containers to hold the organic peroxide. But all those measures have failed due to flood waters overcoming the entire facility, which is only accessible now by boat.

Rowe further explained that the company doesn't expect to be able to get to the plant until the water around Crosby crests in about 5 to 7 days.