This Was the Taliban's Reaction to Trump's Speech 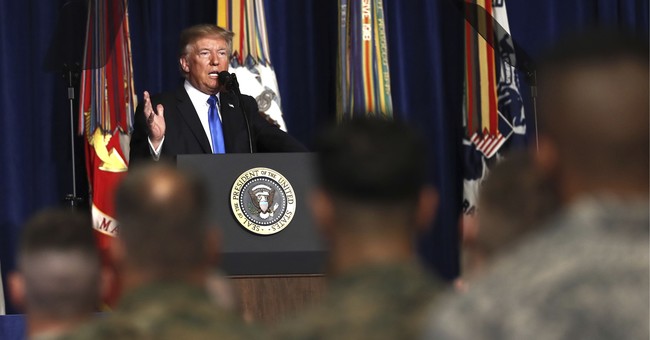 While Afghanistan’s government was impressed with President Trump’s speech on the U.S.’s strategy in the country going forward, with the Afghan ambassador to the U.S. calling the remarks a “10 out of 10,” the Taliban found it “old” and “unclear.”

Zabiullah Mujahid, a spokesman for the Taliban, said the president’s “whole speech was old,” adding that the policy outline was also “unclear.”

Trump said during the speech that he abandoned his own instinct, which told him to pull out, and instead listened to the counsel from his generals and Cabinet to make a decision.

The president said a rapid exit would only lead to a situation like in Iraq, and that any decision to leave would be based on conditions not a timetable.

“From now on, victory will have a clear definition: attacking our enemies, obliterating ISIS, crushing Al Qaeda, preventing the Taliban from taking over Afghanistan, and stopping mass terror attacks against America,” Trump said.

Before his speech the president also authorized an additional 4,000 troops to Afghanistan—a move the Taliban warned last week would only prolong the war.

Peace talks are also off the table for the Taliban until a timeframe is given for withdrawal of U.S. and NATO troops, they said, which Trump vowed to avoid.

“America's enemies must never know our plans, or believe they can wait us out. I will not say when we are going to attack, but attack we will,” Trump said.

Republicans praised the president’s remarks, including Sen. John McCain, who said the speech was a “big step in the right direction.”

“The unfortunate truth is that this strategy is long overdue, and in the interim, the Taliban have made dangerous inroads. Nevertheless, I believe the President is now moving us well beyond the prior administration's failed strategy of merely postponing defeat,” he said.

Unsurprisingly, Democrats were quick to criticize the new Afghanistan strategy.

House Minority Leader Nancy Pelosi said, "Tonight, the President said he knew what he was getting into and had a plan to go forward. Clearly, he did not. The President’s announcement is low on details but raises serious questions."