The Secret Service Is Almost Out of Money to Protect Trump, His Family 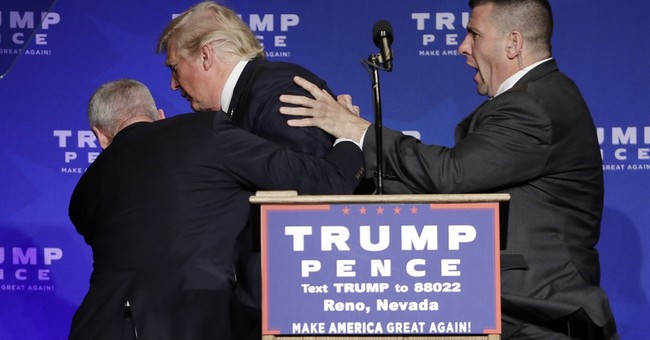 The Secret Service is almost out of money for protecting the president and his family, the agency’s director told USA Today in an interview published Monday.

The issue is the president’s busy travel schedule as well as his large family, Alles explained.

The agency has faced a crushing workload since the height of the contentious election season, and it has not relented in the first seven months of the administration. Agents must protect Trump – who has traveled almost every weekend to his properties in Florida, New Jersey and Virginia – and his adult children whose business trips and vacations have taken them across the country and overseas. […]

Since his inauguration, Trump has taken seven trips to his estate in Mar-a-Lago, Fla., traveled to his Bedminster, N.J., golf club five times and returned to Trump Tower in Manhattan once.

Trump's frequent visits to his "winter White House" and "summer White House" are especially challenging for the agency, which must maintain a regular security infrastructure at each – while still allowing access to paying members and guests. […]

The president, First Lady Melania Trump and the couple's youngest son Barron – who maintained a separate detail in Trump Tower until June – aren't the only ones on the move with full-time security details in tow.

Trump's other sons, Trump Organization executives Donald Jr. and Eric, based in New York, also are covered by security details, including when they travel frequently to promote Trump-branded properties in other countries. (USA Today)

“The president has a large family, and our responsibility is required in law,'' Alles told USA Today. "I can't change that. I have no flexibility.''

Alles said he is in discussions with lawmakers to increase the pay caps for agents from $160,000 to $187,000—a move supported by Democratic Rep. Elijah Cummings, who first brought the issue to light last year.

"We cannot expect the Secret Service to be able to recruit and keep the best of the best if they are not being paid for these increases (in overtime hours),” his spokeswoman Jennifer Werner told the paper.

Amanda Gonzalez, a spokeswoman for Rep. Trey Gowdy, chairman of the House Oversight Committee, said he is "working with other committees of jurisdiction to explore ways in which we can best support'' the Secret Service.

Clearly, the 6,800 agents and officers is not enough to handle all the demands in the Trump administration. After all, they are now protecting 42 people, including 18 of Trump’s family members, which is up from 31 during the previous administration.

"We have them working all night long; we're sending them on the road all of the time,'' Alles said. "There are no quick fixes, but over the long term, I've got to give them a better balance (of work and private life) here."

In the meantime, however, even if Congress approves of Alles’s proposed increase to the spending cap for the agents, roughly 130 agents would still not be fully compensated for all the hours they’ve put in.

"I don't see this changing in the near term," Alles said.

Update: Alles issued a statement that the agency has enough money to protect the president through September.

“The Secret Service has the funding it needs to meet all current mission requirements for the remainder of the fiscal year and compensate employees for overtime within statutory pay caps,” he said.