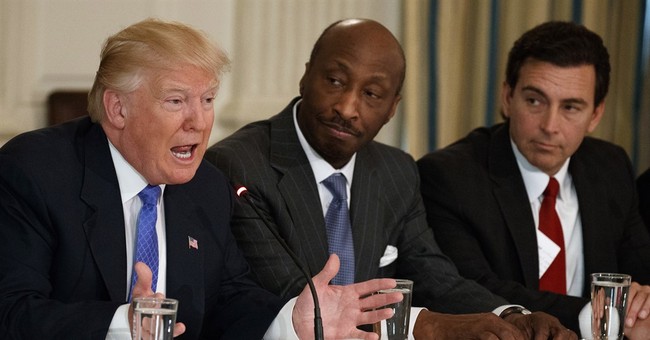 President Trump on Tuesday slammed the corporate leaders who resigned from his American Manufacturing Council this week as “grandstanders” and said they’re all replaceable.

“For every CEO that drops out of the Manufacturing Council, I have many to take their place. Grandstanders should not have gone on,” Trump tweeted on Tuesday. “JOBS!”

Several CEOs announced their resignation from the council this week following President Trump’s initial response to the violence in Charlottesville, Virginia, which failed to specifically denounce white supremacists.

Ken Frazier of Merck pharmaceuticals, Kevin Plank of Under Armour, and Intel’s Brian Krzanich announced their resignations before Trump’s latest tweet, while Scott Paul, the president of the Alliance for American Manufacturing, dropped out moments afterwards.

"I'm resigning from the Manufacturing Jobs Initiative because it's the right thing for me to do," Paul tweeted.

Krzanich explained his reasoning for quitting was to shed light on the “serious harm our divided political climate is causing to critical issues, including the serious need to address the decline of American manufacturing.”

"I resigned because I want to make progress, while many in Washington seem more concerned with attacking anyone who disagrees with them. We should honor – not attack – those who have stood up for equality and other cherished American values. I hope this will change, and I remain willing to serve when it does," he added.

Plank, meanwhile, said “Under Armour engages in innovation and sports, not politics.”

And Merck’s Frazier pledged to “take a stand against intolerance and extremism."