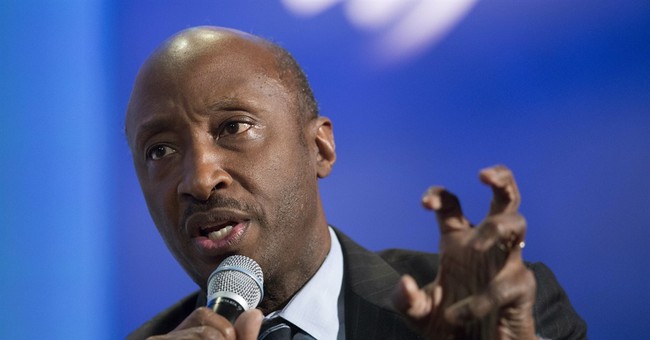 President Trump on Monday slammed Merck CEO Ken Frazier after he announced he was leaving the president’s American Manufacturing Council over the way the president responded to the violence at a white supremacist rally in Charlottesville, Virginia, on Saturday.

Now that Ken Frazier of Merck Pharma has resigned from President's Manufacturing Council,he will have more time to LOWER RIPOFF DRUG PRICES!

The African-American CEO said Monday he was leaving the council “as a matter of personal conscience.”

One person died at the white supremacist rally when a car plowed through a crowd of counter-protesters.

"Our country's strength stems from its diversity and the contributions made by men and women of different faiths, races, sexual orientations and political beliefs," he said.

"America's leaders must honor our fundamental values by clearly rejecting expressions of hatred, bigotry and group supremacy, which run counter to the American ideal that all people are created equal. As CEO of Merck and as a matter of personal conscience, I feel a responsibility to take a stand against intolerance and extremism."

President Trump condemned the violence over the weekend but stopped short of specifically calling out white supremacists, neo-Nazis, the KKK and other extremist groups.

"We condemn in the strongest possible terms this egregious display of hatred, bigotry and violence on many sides — on many sides," Trump said during a press conference at his golf club in Bedminster, New Jersey.