Carville: It'll Be ‘Very, Very Difficult’ For Dems to Take Back Senate in 2018 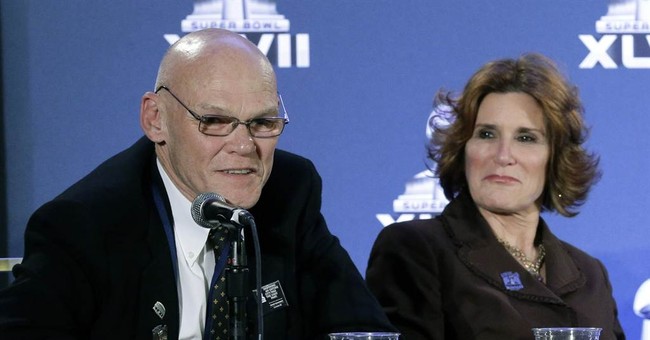 Democratic strategist James Carville predicted Sunday that it will be “very, very difficult” for Democrats to win the Senate in 2018.

As for the House, he believes that’s a different story, putting those chances at "50-50."

"I think right now most Democrats are trying to focus on the 2018 elections and trying to recruit people and keep incumbents, and, you know, I would say we have a pretty good chance of taking the House back," Carville told New York radio host John Catsimatidis, reports The Hill.

“The problem in the Senate is we have a large number of seats we have to hold in states that Donald Trump carried. Indiana, Missouri, you know, places like that we have to hold seats,” he added.

Democrats would need to win three Senate seats, and Carville said the only state that could be promising is Nevada.

“The only places where we have an opportunity for pick up are, you know, Nevada is pretty good. After that Arizona is less good, then you’re down to Texas and Alabama,” he said.

The veteran Democrat’s comments come as Senate Republicans look to pass an ObamaCare repeal-and-replace bill, which many promised their constituents.

The healthcare bill’s high unpopularity, however, has put Republicans in a difficult position.

“Anybody that moves to change healthcare loses,” the longtime Clinton confidant said. (The Hill)

Carville also predicted it will be a crowded Democratic field for the 2020 election.

“It will be double digits,” he said.

“There will be a number of serious candidates that are going to run on the Democratic side, and our party needs that.”