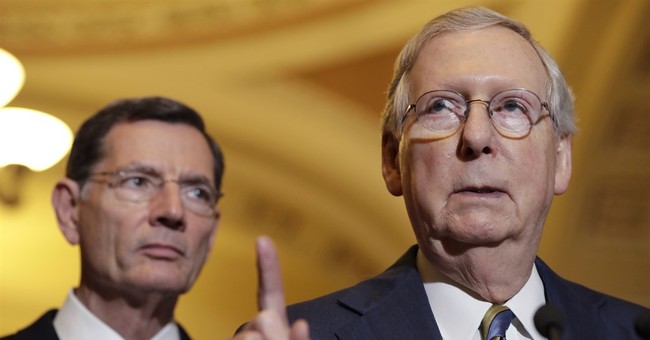 The Republican Study Committee drafted a warning letter to Senate Majority Leader Mitch McConnell raising “serious concerns” over changes to the healthcare bill, which the conservative bloc argued “may jeopardize final passage in the House.”

“As the Senate continues its deliberative process, we urge you to carefully evaluate the American Health Care Act and consider the important role these specific policies played in building consensus in the House,” the letter states.

The caucus says four elements are critical to keep in the healthcare legislation. They are:

1. Ending the extra federal funds for Medicaid expansion by 2020. The Senate is proposing a more gradual phase-out of this money. Leadership has proposed a three-year transition, beginning in 2020. More moderate senators are pushing for a longer, seven-year phase-out.

2. Keeping a waiver that lets states opt out of ObamaCare insurance regulations. The Senate might do away with a provision in the House bill that would allow states to let insurers charge consumers more based on their health status.

3. Repealing ObamaCare’s taxes “in the most expeditious manner possible.” The Senate is eying keeping some taxes around for longer.

The letter has not been sent yet, but a draft was seen by multiple news outlets. Non-RSC member still have the option to sign onto the letter if they wish.

The MLB's Unforced Error Could Be Georgia's Walk Off Homerun
Townhall
'Ethnic studies' teacher training session warns them to be extra careful 'now that we're in people's homes' and parents might see it
Twitchy
Gaetz Turns it Around on CNN Journo After Network Exec Says Their Coverage of Him is "Propaganda"
Redstate
The Morning Briefing: Project Veritas Confirms CNN Is a Cesspool of Biased Lies
PJ Media