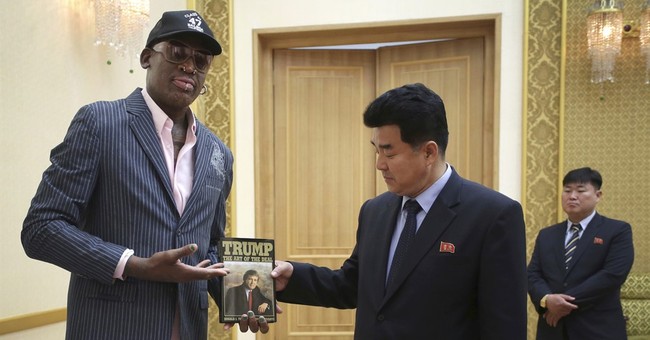 Dennis Rodman gave a copy of “The Art of the Deal” to North Korea’s sports minister Kim Il-Guk as a present for Kim Jong-Un during his trip to the rogue nation this week.

The former NBA player, who arrived in Pyongyang on Tuesday, said he was “trying to open the door” for relations between the U.S. and North Korea.

When asked if he had spoken to the president about his trip, Rodman said: "Well, I'm pretty sure he's pretty much happy with the fact that I'm over here trying to accomplish something that we both need."

Trump’s 1987 bestseller was one of a number of gifts formally presented to Il-Guk. He also delivered a copy of “Where’s Waldo?,” a mermaid puzzle, signed jerseys and two sets of soap.

“In the past, our respected supreme leader met you several times, and he used his precious time to watch the basketball match with the players you brought here. In the past he met you, so our people all know you well. And also we feel that you are an old friend,” Kim Il-guk said to Rodman during the gift-giving ceremony.

The NBA hall-of-famer, who’s visited North Korea several times in the past, met with country’s Olympians and watched an exhibition basketball game.

"All of you guys should be proud of yourselves, because, you know, a lot of people don't give you guys credit, because this is such a small country, and not many people from North Korea can compete around the world," Rodman told the athletes. "But for you guys to come back here in your country, with a medal, that says a lot about North Korea, because people don't really take North Korea so seriously about sports or anything like that."

Share this on Facebook
Tweet
House Forces Taxpayers to Fund Abortion, Even After Speaker Pelosi's Bishop Confirms Church Stance on Issue
Rebecca Downs
NYT Guest Essay Opinion Piece Claims 'There Is No Good Reason You Should Have to Be a Citizen to Vote'
Rebecca Downs
The Biden Administration Is Suing Greg Abbott for Trying to Protect Texans from COVID Positive Immigrants
Rebecca Downs
Poll Shows There is Shifting Narrative on Jan. 6 Select Committee