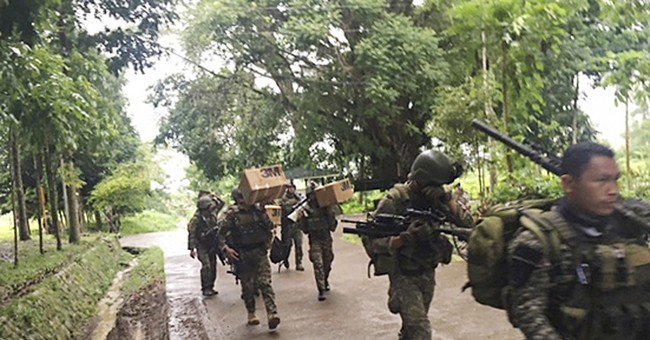 So far at least 21 people died in the fighting, which began Tuesday after the army raided the hideout of the militant group’s commander, Isnilon Hapilon. Hapilon, who pledged allegiance to ISIS in 2014, is on Washington’s radar as one of the most-wanted terrorists.

"We are in a state of emergency," Philippine President Rodrigo Duterte said Wednesday. "I have a serious problem in Mindanao and the ISIS footprints are everywhere."

Duterte declared martial law for 60 days across the southern third of the country, vowing to be “harsh.”

The controversial leader who’s been brutal in his drug crackdown, promised that law-abiding citizens had nothing to worry about and that he wouldn’t allow abuses, AP reports.

Duterte said a local police chief was stopped at a militant checkpoint and beheaded, and added that he may declare martial law nationwide if he believes the group has taken a foothold.

The priest, Father Chito, and the others had no role in the conflict, said Archbishop Socrates Villegas, president of the Catholic Bishops Conference of the Philippines.

"Of course, our country needs modern weapons, we had orders in the United States, but now the situation there is not very smooth and in order to fight the Islamic State, with their units and factions, we need modern weapons," Duterte said, Russian state news agency Tass reported.