Trump on Iran Calling for Israel's Destruction: 'Not With Donald J. Trump' 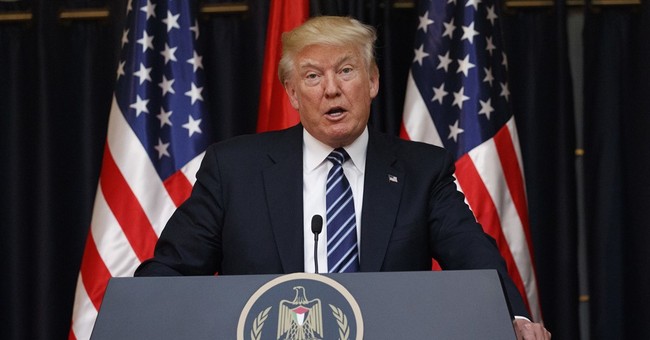 At the conclusion of his trip to Israel, President Trump delivered some final remarks reasserting the United States’ support for the Jewish State and expressing hope for peace between the Israelis and Palestinians.

"Israel is a testament to the unbreakable spirit of the Jewish people," he said. "From all parts of this great country, one message resounds, and that is the message of hope. Down through the ages, the Jewish people have suffered persecution, oppression, and... [others have] sought their destruction.  ... I make this promise to you: My administration will always stand with Israel."

Trump, who earlier in the day met with President Mahmoud Abbas of the Palestinian Authority, also expressed optimism for the Israeli-Palestinian conflict.

"The Palestinians are ready to reach for peace,” he said. “I know you've heard it before, I am telling you, that's what I do, that they are ready to reach for peace,” he added, noting that Netanyahu wants peace as well. “Making peace will not be easy. But with determination, compromise, and the belief that peace is possible, Israelis and Palestinians can make a deal."

Trump also spoke of the urgency for all civilized nations to join together to fight terrorism, and focused on the threats Israel faces.

"Israelis are murdered by terrorists wielding knives ... Hamas and Hezbollah launch rockets into Israeli communities where school children ... must run to the bomb shelters with fear but with speed. ISIS targets Jewish neighborhoods, synagogues …Iran's leaders routinely call for Israel's destruction. Not with Donald J. Trump," he said to thunderous applause.

"The US is firmly committed to keeping Iran from developing a nuclear weapon and halting their support of terrorist and militias. So, we are telling you right now, that Iran will not have nuclear weapons," Trump added.

The president will leave for Rome later on Tuesday.