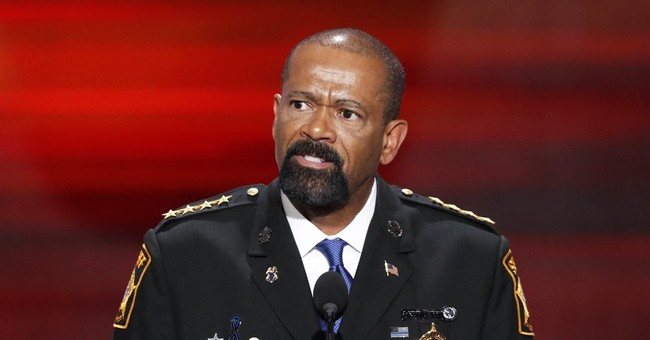 Sheriff David A. Clarke said in an interview that aired Monday he was unsure whether the Trump administration will still hire him after CNN reported he plagiarized parts of his 2013 master’s thesis.

"This is about weakening, like I said, the support that I give and that I have with President Donald Trump and Secretary Kelly, it's to weaken their resolve to hang in there with me," Clarke told radio host Joe Pags of the report.

CNN KFile found that he plagiarized dozens of passages in his thesis, with source information included only in the footnotes even though sentences were used verbatim without quotes. Other times he only changed a few words.

"Will it be successful? It might, but I'm not going to lose any sleep over that," he added.

The Milwaukee County sheriff announced last week that was “both honored and humbled to be appointed to” the position of assistant secretary in the Department of Homeland Security, but DHS later said no announcement had been made for the senior position.

Clarke was asked during the interview whether he believed the report would influence the decision to hire him.

"Who knows? I say that sincerely, because I'm in a political environment, sometimes political decisions are made," he said. "President Donald Trump has to do what's in the best interest of his administration. And they've cut people loose before, I don't know why, so time will tell, but I know that he values loyalty."

The sheriff denied the allegations over the weekend, telling the Milwaukee Journal Sentinel that the individual behind the report was a “sleaze bag” who had a “political agenda.”

On Tuesday, however, he softened his tone a bit.

"Maybe from a formatting standpoint the thesis isn't perfect, but the content is there," he acknowledged on "The Sid and Bernie Show."