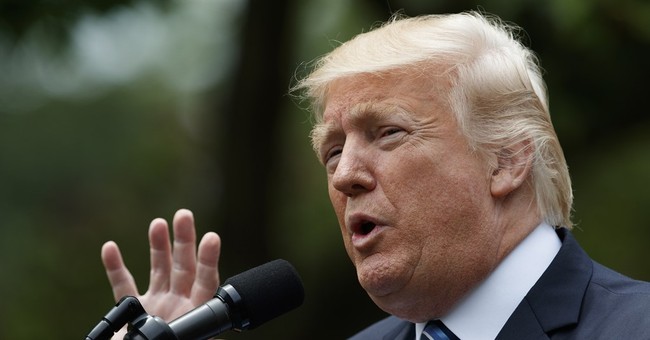 The Democrats have said some of the worst things about James Comey, including the fact that he should be fired, but now they play so sad!

James Comey will be replaced by someone who will do a far better job, bringing back the spirit and prestige of the FBI.

Comey lost the confidence of almost everyone in Washington, Republican and Democrat alike. When things calm down, they will be thanking me!

The president then retweeted a story on the Drudge Report about scandals that happened under Comey.

In his letter recommending the FBI director's removal, Deputy Attorney General Rod Rosenstein said the Bureau's "reputation and credibility have suffered substantial damage” under Comey. Rosenstein outlined the “Director’s handling of the conclusion of the investigation of Secretary Clinton’s emails” as the reason for his recommendation.

Trump then turned his attention to Sen. Richard Blumenthal, who said after learning of Comey's firing that "not since Watergate have our legal systems been so threatened, and our faith in the independence and integrity of those systems so shaken."

Watching Senator Richard Blumenthal speak of Comey is a joke. "Richie" devised one of the greatest military frauds in U.S. history. For....

years, as a pol in Connecticut, Blumenthal would talk of his great bravery and conquests in Vietnam - except he was never there. When....

caught, he cried like a baby and begged for forgiveness...and now he is judge & jury. He should be the one who is investigated for his acts.

Blumenthal appeared on MSNBC's "Morning Joe" Wednesday and said he was in disbelief when he heard Comey was fired.

“I could not comprehend that the president of the United States was firing an FBI director whose investigation had him, the president, as a potential target,” he said. “It is such a defiance of the rule of law, and common sense, that I could not believe it.”

Update: Trump then called out CNN for reporting fake news.

The Roger Stone report on @CNN is false - Fake News. Have not spoken to Roger in a long time - had nothing to do with my decision.