Krauthammer Slams Obama's JFK Speech: ‘Nice To Be Reminded of Why We Should Be Grateful as a Nation That He Is Gone’ 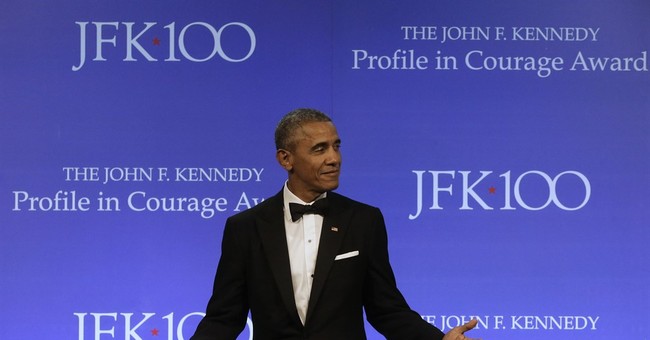 Syndicated columnist Charles Krauthammer slammed former President Obama for his “condescending” acceptance speech at the JFK Library on Sunday, where he lectured Congress on being courageous and defending the Affordable Care Act.

"I hope that current members of Congress recognize it takes little courage to aid those who are already powerful, already comfortable, already influential, but it takes great courage to champion the vulnerable and the sick and the infirm," Obama said during his speech.

Krauthammer said Obama’s comments were a veiled swipe at Republicans’ American Health Care Act, and served as a good reminder to be thankful he’s out of office.

“It’s been a full 100 days but it’s nice to be reminded of why we should be grateful as a nation that he is gone,” Krauthammer said.

“There are a lot of arguments you can make on either side about Obamacare but notice how it was complete moral condescension,” Krauthammer said of Obama’s speech. “The other guys are cowards because I, and the people who support me, and who oppose the legislation stand with the poor and afflicted and the others are on the side of the rich and powerful. That’s nonsense. What the Democrats have done is practically committed political suicide."