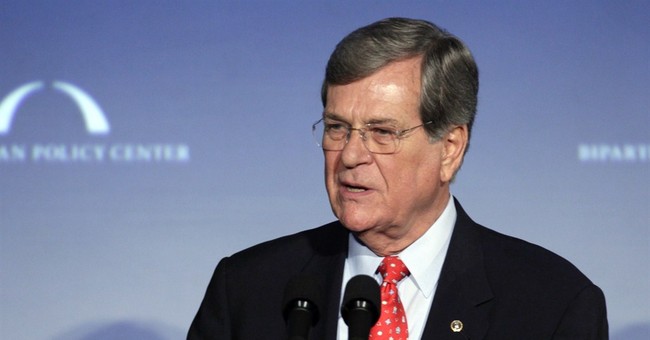 Shortly after Democrats mounted a filibuster against Supreme Court nominee Neil Gorsuch, leading Republicans to use the nuclear option, former Senate Majority Leaders Bob Dole and Trent Lott published an op-ed in the Washington Post explaining why the 60-vote threshold was never really a standard to begin with.

“[I]f Democrats insist on denying Judge Neil Gorsuch the same up-or-down vote that Republicans gave to Elena Kagan and Sonia Sotomayor, it is time Senate Republicans dismissed the judicial filibuster for what it is today — a power play dressed up as inviolable tradition,” the former Republican leaders wrote.

Dole and Lott argued that the Constitution and longstanding precedent do not require 60 votes for Senate confirmation of a Supreme Court nominee “since the Constitution provides that each house of Congress shall determine the rules of its proceedings, which the first Senate did by majority vote.”

The two noted that as former Republican leaders in the Senate, they’ve watched Senate traditions continue to be eroded, particularly in regard to the filibuster of President George W. Bush’s judicial nominees, as well as changes to the Senate rules under President Obama to advance his lower-court nominees.

“Sadly, these short-term power plays are culminating in the current effort to deny an up-or-down vote to an utterly qualified nominee, who became a federal judge in the first place with the unanimous consent of the Senate,” they write.

Dole and Lott then lay out the case for why there really is no historical precedent for arguments that the 60-vote threshold is “standard.”

As The Post fact-checker who examined this “slippery” claim documented, there have been only four cloture votes for Supreme Court nominees. In a 2005 Harvard Journal of Law & Public Policy article on the filibuster, two students of Senate history, Martin Gold and Dimple Gupta, pointed out that when the Senate changed its cloture rules to apply to all “debatable propositions” in 1949, nominations were swept into the new rule “by happenstance. The Senate debates include not a single mention of filibusters of nominations, likely because the concept was so alien to the Senate of 1949.”

Second, the Senate has never killed a Supreme Court nomination by filibuster. Key Democratic senators noted that they could have denied Clarence Thomas confirmation but did not believe it right not to give him an up-or-down vote. He was confirmed 52 to 48. (In 1968, Justice Abe Fortas withdrew his nomination for chief justice after one failed cloture vote because of bipartisan concerns over ethical lapses that raised serious issues about his character; it had nothing to do with the nominee’s ideology or politics.)

Third, Reid and other Senate Democrats showed no regard for this “standard” or the Senate’s filibuster tradition, real or imagined, in 2013.

Much like what current Senate Majority Leader Mitch McConnell said—that Democrats would filibuster Ruth Bader Ginsburg if President Trump nominated her, Dole and Lott believe no similar nominee could be confirmed by “today’s Democrats” if the 60-vote “requirement” remained.