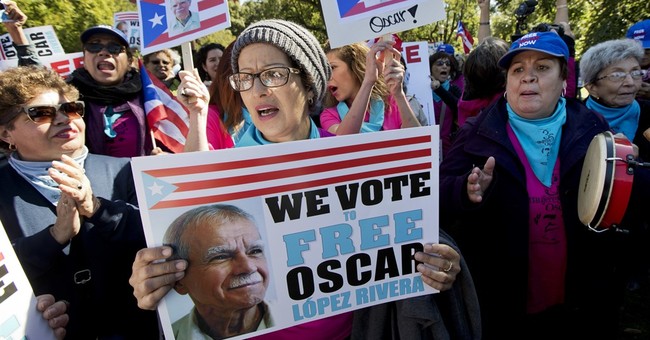 In truly progressive fashion, Chicago renamed one of its streets after a terrorist.

Earlier this month Alderman Robert Maldonado submitted a proposal to name three blocks of a city street after Oscar Lopez Rivera, the founder of the Puerto Rican terror group FALN, which was responsible for 120 bombings and armed robberies in the U.S. during the ‘70s and ‘80s that killed nine and injured hundreds of others.

On Wednesday, aldermen approved the measure honoring Lopez Rivera, the terrorist whose 70-year sentence was recently commuted by Barack Obama.

The small sign above an inner street in Humbodlt Park through the heart of Chicago's Puerto Rican community is just a few inches long, but the name that will soon be on it bears a deep and painful history.

But Townhall columnist Joe Connor, whose father was murdered in the 1975 attack on the Fraunces Tavern in Manhattan, couldn’t disagree more.

"My father was murdered by the FALN. Oscar Lopez was a member of the FALN, leader of the FALN. He is a terrorist and Chicago is honoring him," Connor said, reports ABC7.

“The idea that people will walk by and see this street sign and think that Oscar Lopez was some sort of great person — it’s diabolical,” Connor said, the Chicago Sun Times reports. “The world is upside down here. What’s next for Chicago, bin Laden Boulevard? Charles Manson Court?”

Maldonado said the honorary street "is a little thing that we're doing for him in the Puerto Rican community," but not all Puerto Ricans are happy about it.

Some even apologized to Connor for the aldermen's vote.

"On behalf of those and myself who find naming a street honoring Oscar Lopez Rivera appalling; we are truly sorry, Mr. Connor, and to all those who have been hurt with those radical and extremist ideas. As a Puerto Rican female, I am so ashamed that Oscar Lopez, leader of the FALN, and a convicted terrorist, will be getting a street sign honoring him," Janette Lopez wrote in a letter to the editors of the Chicago Sun Times.

"I’m assuming Ald. Roberto Maldonado (26th) couldn’t find anyone who truly deserved this honor. I am speechless. Shame on you Ald. Maldonado! Shame on all of you who supported this thoughtless designation!"