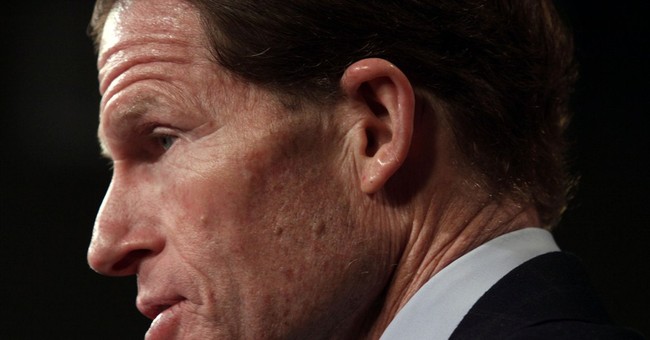 President Trump isn’t the only one calling out Sen. Richard Blumenthal for lying about serving in Vietnam—14 medal of honor recipients have joined the bandwagon and are using it to point out the senator’s hypocrisy on Judge Neil Gorsuch.

In an open letter published on The Washington Examiner, the Vietnam veterans write that by calling on his Senate colleagues to subject Trump’s Supreme Court nominee to “extreme vetting,” the Democratic senator from Connecticut is opening the door for Americans and veterans to “scrutinize [his] hypocrisy in doing so.”

“The fact you repeatedly and consistently claimed to have served in Vietnam is a gross case of stolen valor in our opinion. You obtained at least five military deferments between 1965 and 1970, at least two of which were seemingly political favors to you so that you could avoid joining us in a war zone,” they write, before listing examples of when the senator ‘inflated’ his record of service.

Speaking at a rally supporting troops overseas in 2003, Blumenthal said, “When we returned, we saw nothing like this.”

The New York Times also reported in 2008 that he said "We have learned something important since the days that I served in Vietnam” and that he remembers “the taunts, the insults, sometimes even physical abuse” from having “served during the Vietnam era.”

Blumenthal’s duties during the war appear to have consisted of recycling efforts, Toys for Tots campaigns, and aiding in the improvement or construction of facilities. These services, the veterans wrote, are nothing to be ashamed about.

“You should be proud that you shared a uniform with so many brave souls who endured the hardships of war,” they note, “but instead you chose to attempt to deceitfully and craftily join their ranks with your intentionally vague statements and false claims. Quite simply, it is impossible to "misspeak" about having seen a war.”

Circling back to Gorsuch, the medal of honor recipients explain that concerns about any appointee are “honest and legitimate,” but Blumenthal is “neither.”

“If you ever had a sense of duty, if ever you respected the service and sacrifice of others, then please recognize your duty now: Sen. Blumenthal, "take your seat"!”