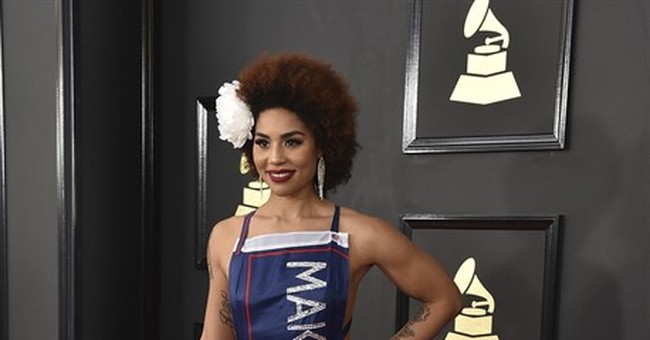 Joy Villa made quite the political statement on the red carpet Sunday night during the Grammys.

The singer and songwriter wore a red, white, and blue dress with ‘Make America Great Again’ on the front, and ‘Trump’ on the train.

At first, the 25-year-old showed up wearing a white dress, then revealed the political statement dress underneath.

Conservatives were quick to applaud Villa for driving the left nuts with the bold outfit choice.

#JoyVilla is a singer at the Grammys who showed up with a MAGA dress. She needs our support now for being so bold: pic.twitter.com/oUpoivxe4w

How about #JoyVilla's dress at the #GRAMMYs tonight! Props for expressing your beliefs... Hollywood liberals must be losing their mind! pic.twitter.com/TN3FBe5Ef2

What’s more, the designer behind the dress is a gay Filipino immigrant who is supportive of President Trump despite the recent controversy over his executive order on immigration.

"It’s more so about love," Andre Soriano said said about the gown," according to The Hollywood Reporter. "We all live on this planet. I’ve never been in the political area. However, it’s just so crazy that people are getting beat up because they voted for Trump, or this and that, someone wants to bomb the White House....I am an American, I moved here from the Philippines and I highly believed in the trueness of what this country can bring. It’s about bringing people together, that’s the message."