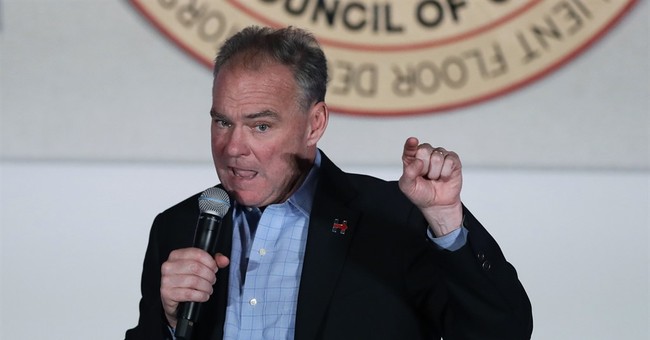 Sen. Tim Kaine said on Sunday that it was no coincidence that on the day President Trump signed an executive order on immigration, thereby imposing a “religious test” on Muslims, his administration also failed to reference Jews in a Holocaust remembrance statement.

“You think it’s more than a coincidence that it all happened on Friday?” he asked.

"All of these things are happening together," said the former Democratic vice presidential candidate. "When you have the chief political adviser in the White House, Steve Bannon, who is connected with a news organization that traffics in white supremacy and anti-Semitism, and they put out a Holocaust statement that omits any mention of Jews."

Kaine went on to note that former Presidents Obama and Bush always discussed Jews when talking about the Holocaust.

“The final solution was about the slaughter of Jews. We have to remember this. This is what Holocaust denial is," he said. “The fact that [the Trump administration] did that … and imposed this religious test against Muslims in the executive orders on the same day, this is not a coincidence."

In the statement, Trump remembered “the victims, survivors, heroes of the Holocaust” but he did not specifically mention the extermination of the Jewish people.

Trump’s Chief of Staff Reince Priebus defended the president’s statement on Sunday, saying he does not “regret the words” used in the statement and that the administration wasn’t “whitewashing anything.”

"Well, I recognize, in fact, obviously that that was what the Holocaust was about," he told Todd, “and it's a horrible event."

He continued: “And obviously I think you know that President Trump has dear family members that are Jewish."

Priebus went on to say he doesn't "regret the words," adding, "I mean, everyone's suffering in the Holocaust, including obviously all of the Jewish people affected and the miserable genocide that occurred, is something that we consider to be extraordinarily sad and something that can never be forgotten."