Ads in Dozens of Cities Offer to Pay Protesters Up to $2,500 to Disrupt Trump Inauguration; UPDATE: It Was a Hoax 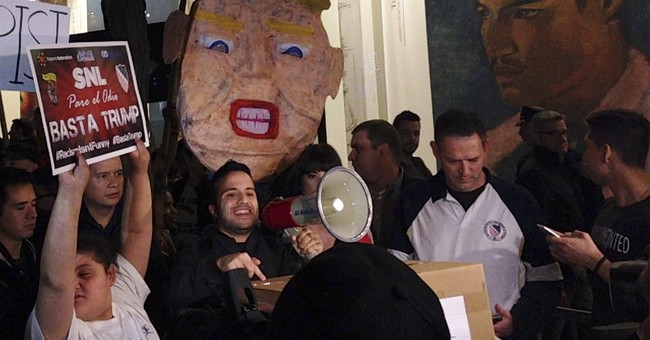 Update: On "Tucker Carlson Tonight" Tuesday, the Fox News host exposed the group behind the ads as a fraud. The man claiming to be the director of operations for the Demand Protest played along during most of the interview, then towards the end admitted "It's pretty darn easy these days to just say whatever the heck you want on national TV and have it passed off as truth." He also repeatedly referred to Chelsea Manning during the interview as Peyton Manning. Enjoy the video below:

Original Post: There may really be such a thing as a professional protester.

Demand Protest, a San Francisco based company, has posted identical job ads in more than 20 cities across the U.S. last week seeking “operatives” to fight against President-elect Trump, The Washington Times reports.

“Get paid fighting against Trump!” the ad, posted on Backpage.com, reads.

“We pay people already politically motivated to fight for the things they believe. You were going to take action anyways, why not do so with us!” the ad continues. “We are currently seeking operatives to help send a strong message at upcoming inauguration protests.”

And the pay isn’t half bad, either. The group, which bills itself as the “largest private grassroots support organization in the United States,”is offering a monthly retainer of $2,500 plus a pay rate of $50 per hour for events on the condition that operatives attend six events per year. Full time operatives can also enjoy benefits such as health, vision, and dental insurance.

While Trump has long complained about paid protesters, the Washington Post said in a November column that “there’s simply no credible evidence that the opposition to Trump is spurred by anything other than legitimate concern about what his presidency might entail.”

If the ads are fake, whoever is behind Demand Protest has gone a long way to make the scam appear real, The Washington Times notes.

If the Demand Protest ads are ruses, however, someone has gone to a great deal of trouble to sell the scam. The classifieds are running in at least two dozen cities, including Los Angeles, New York, Chicago, Dallas and Houston, and the company operates a slick website that includes contact information.

San Francisco phone number listed on the website was answered with a voice-mail message identifying the company by name. A request for comment left Monday evening was not immediately returned.

The website, which says that the company has provided 1,817 operatives for 48 campaigns, promises “deniability,” assuring clients that “we can ensure that all actions will appear genuine to media and public observers.”

“We are strategists mobilizing millennials across the globe with seeded audiences and desirable messages,” says the website. “With absolute discretion a top priority, our operatives create convincing scenes that become the building blocks of massive movements. When you need the appearance of outrage, we are able to deliver it at scale while keeping your reputation intact.”

Protests led by progressive groups such as Occupy Inauguration and the DisruptJ20 coalition are being held on Inauguration Day in the nation’s capital and all across the U.S.