Clinton Supporter and NFL Legend Jim Brown After Meeting With Trump: 'I Fell In Love With Him' 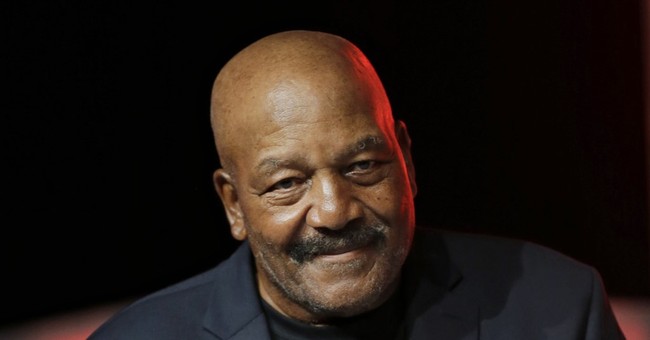 Renowned Cleveland Browns running back Jim Brown supported Hillary Clinton in the election but after meeting with President-elect Donald Trump on Tuesday, the NFL legend said he “fell in love with him.”

In an interview with CNN’s Brooke Baldwin, Brown said he went to Trump Tower because the president-elect asked him to come. In his explanation for the visit, he emphasized the fact that Trump was now “his president” and that “he won it fair and square.”  Legend also said he admired the president-elect for reaching out to those he knows didn’t support him.

The president-elect left such a good impression on Brown that he told Baldwin he fell in love with him.

“We're not bourgeoisie, we're not above the people. But I fell in love with him because he really talks about helping African-America, black people, and that's why I'm here,” he said.

“You fell in love with Donald Trump today?” Baldwin asked.

“Well, it isn't really just about Donald Trump. It's about him in the position he occupies. That position is considered the most important person in the world. The most powerful person in the world is supposed to be the president. When he goes through what he went through to become the president he got my admiration because no one gave him a chance. You know, they called him names. People that called him names when he won, he reached back and brought them along with him. He held no grudges. So who am I to say I played quarterback when I played running back? I don't know everything and I don't try to address everything, but the reception that I got today from him I will always remember that because he listened to us and he knows that we can bring something to him to help the people of this country.”

Brown has long been an activist for minorities and inner cities. In 1988 he founded the Amer-I-Can program, which is designed to “help enable individuals to meet their academic potential, to conform their behavior to acceptable society standards, and to improve the quality of their lives by equipping them with the critical life management skills to confidently and successfully contribute to society,” according to the group’s website.