Gitmo Detainee: Saudi Arabia's Terrorist Rehab Center Is Actually Encouraging Jihadists to Get Back in the Fight 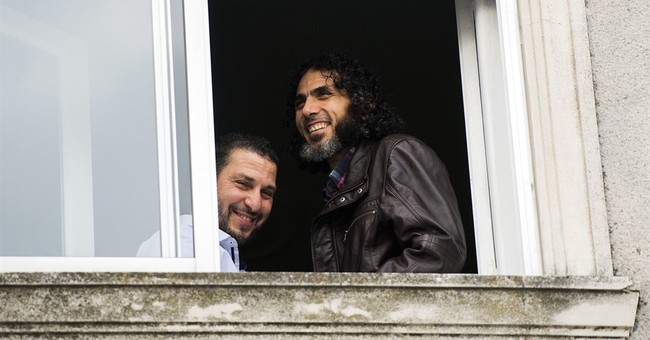 A condition of the Obama administration’s release of Gitmo detainees to Saudi Arabia was that they enroll in a terrorist rehabilitation center, but according to one detainee, it’s all just a front.

Despite the use of activities like swimming and PlayStation to help de-radicalize terrorists, the Prince Mohammed bin Naif Counseling and Care Center may actually be encouraging the former detainees to get back in the fight.

This, at least, is the claim of senior al Qaeda operative Ghassan Abdullah al-Sharbi, who outed the center to the Gitmo parole board, recently declassified documents show.

“You guys want to send me back to Saudi Arabia because you believe there is a de-radicalization program on the surface,” al Sharbi said at his hearing earlier this year.

He continued: “They’re launching more wars and the [United] States is backing off from the region,” he said. “They’re poking their nose here and here and there and they’re recruiting more jihadists, and they’ll tell you, ‘Okay, go fight in Yemen. Go fight in Syria.’ ”

Al-Sharbi is one of the longest-serving, and most unrepentant, prisoners at Gitmo. A Saudi national with an electrical engineering degree from King Fahd University, he attended a US flight school associated with two of the 9/11 hijackers. He traveled to Afghanistan in the summer of 2001 and trained at an al Qaeda camp, building IEDs to use against allied forces.

Al-Sharbi was captured March 28, 2002, at an al Qaeda safehouse in Faisalabad, Pakistan, with senior al Qaeda leader Abu Zubaydah. According to his US intel dossier, he told interrogators that “the US got what it deserved from the terrorist attacks on 9/11.”

Given a chance at parole after 14 years, however, al-Sharbi was surprisingly frank with the board.

He explained that Riyadh is actively recruiting and training fighters to battle Iranian elements in neighboring Yemen and Syria. Saudi views Shiite-controlled Iran as a regional threat to its security.

Al Sharbi said that Saudi Arabia is playing the U.S. and that he did not want to enroll in the program to be used by the king.

“They will proudly tell you they will fight terrorism,” he said. “That means they will support it.”

“And I’m not going to Saudi unless I am sure they’re not gonna be using me,” he added. “This is in the cause of a king. This is not a true jihad.”

A growing body of evidence backs up his claims. Last month, for example, a WikiLeaked email from Hillary Clinton revealed, citing US intelligence sources, that Saudi Arabia has provided “clandestine financial and logistic support to” ISIS and other Sunni terrorist groups in the region. [...]

Lending credence to al-Sharbi’s charges, the three-month program includes a few hours a day of lessons in Islam from Saudi clerics and “Shariah specialists.”

“Beneficiaries spend 15 hours a week in the Shariah program,” according to a local Jeddah press report, which is triple the amount of time devoted to psychological counseling.

Thus far, 134 Saudi detainees have been sent to the Saudi rehabilitation centers in Riyadh and Jeddah. Al Sharbi is not one of them, however. His parole was declined so he is still at Gitmo with 60 other detainees.