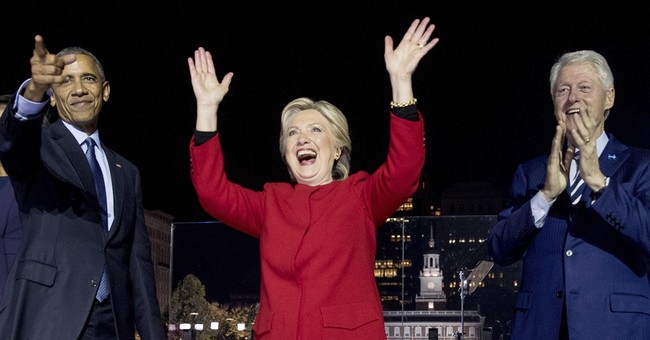 At long last, Election Day is here—and the final Reuters/Ipsos States of the Nation project poll does not look good for Donald Trump. It gives Hillary Clinton a 90 percent chance of defeating the Republican nominee in the race for the White House.

Her chances are roughly similar to last week's odds, and any upset by Trump on Tuesday depends on an unlikely combination of turnouts of white, black and Hispanic voters in six or seven states, according to the survey released on Monday.

The former secretary of state was leading Trump by about 45 percent to 42 percent in the popular vote, and was on track to win 303 votes in the Electoral College to Trump’s 235, clearing the 270 needed for victory, the survey found.

Trump's chances rest with his performance in Florida, Michigan, North Carolina and Ohio, which were too close to call on Sunday, when polling ended, and Pennsylvania, where Clinton enjoyed a slim lead of three percentage points. For Trump to win, he will have to take most of those states.

Any combination of two losses in the three states of Florida, Michigan and Pennsylvania would almost assuredly result in a Clinton victory. At the same time, Trump must hold onto the traditionally Republican state of Arizona, where the race has drawn close, and hope that independent candidate Evan McMullin does not claim another Republican bastion, Utah.

If Trump is to pull off a win, he needs more white Republican voters than in 2012, fewer African-American voters, and a “smaller-than-predicted increase” in Hispanic voters, according to the project.

The project is a survey of 15,000 people from all 50 states plus Washington, D.C., and has been conducted each week.